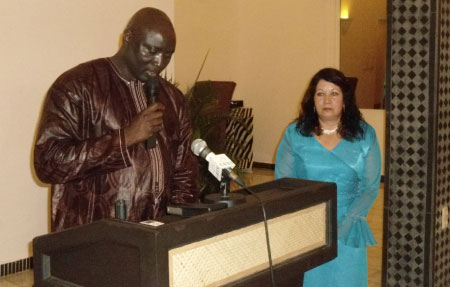 The embassy of the of in on Tuesday celebrated the country’s 200 years of independence, freedom and liberty from the Spanish crown, which colonized the North American state.

The celebration, held at the prestigious five-star Coco Ocean Hotel in Bijilo, brought together senior government officials, cabinet ministers, members of the diplomatic and consular corps, private sector, as well as the media and civil society representatives.

The Venezuelan declaration of independence, according to officials of the embassy, is a statement adopted by a congress of Venezuelan provinces on 5th July 1811, through which Venezuelans took the decisions of breaking away from the Spanish crown; establish a new nation based on the premises of the equality of individuals, the abolition of censorship and a dedication to freedom of expression.

Speaking on the occasion, Lourdes Perez, Venezuelan ambassador to the , said the people of are on this day moved by the desire to remain free and sovereign.

Ambassador Perez added that their independence is no longer a word with connotations of hope, but it is a reality sprouting in their spirits.

According to her, the independence of was the byproduct of both a complicated network of local politicians and revolutionary forces encompassing at least three continents.

“It was not until revolutions broke out in North America and Europe that the political environment in allowed for the deceleration of independence,” she noted.

Dr Momodou Tangara, minister of Foreign Affairs, International Relations and Gambians Abroad, in a statement, reaffirmed the government’s commitment to deepening the already existing brotherly ties between the and .

He told the gathering that the 200 years of independence marks another milestone in the accomplishments of in their commitment to freedom, peace, prosperity and advancement of the brotherly people of .

According to Foreign Affairs minister Tangara, the can tap into and greatly benefit from the immense experience and best practices amassed by Venezuelans over the past 200 years to aid in achievement of the objectives of the Vision 2020 and other development aspirations.

“What has achieved over the decades serves as a model for developing countries such as The Gambia to emulate without reinventing the wheel for the benefit of all Gambians and humanity in general,” Tangara added.

He stated that since the establishment of bilateral relations between the and , the two countries have made great achievements in deepening the brotherly ties, which the two heads of states have committed themselves to.

“Therefore, given our continued commitment to enhance bilateral relations, I am glad to note that our two governments have enjoyed harmonious and cordial relations based on shared common values, our commitment to the maintenance of international peace and security,” he added.

Tangara reiterated government’s commitment to uphold its fraternal ties of friendship and cooperation with the of , while wishing President Hugo Chavez a speedy recovery and best wishes for his continued good health.

Caravan of Mercy donates to hospitals