An American NGO, Benevolent Health Care Foundation, through the US Embassy in The Gambia Wednesday handed over a container of medical equipment and supplies to the Gambia Armed Forces, at a ceremony held at Yundum Barracks.

Major Seedy Touray, Chief Medical Officer of the Gambia Armed Forces, described the event as very important in that the donated medical items are out to enhance the capacity of Gambia Armed Forces medical service, to complement command efforts at providing quality and accessible healthcare to GAF members, their families and by extension the civil population across the length and breadth of the country.

He said the event is historic, as it was the first-time such a donation was made from Benevolent Health Care Foundation to Gambia Armed Forces, noting that the presence of the dignitaries in the gathering was an indication of strong leadership commitment from both parties and reflection of the cordial relationship between GAF and DHAPP – US Department of Defense HIV/AIDS Prevention Program.

Major Touray further noted that the Gambia Armed Forces medical service has been undergoing rapid transformation and DHAPP is a key contributor to this process.

He added that since 2005, the department had rendered numerous support to GAF, ranging from providing funding for the implementation of GAFHAPP approved activities, HRD, construction and refurbishment of Fajara Barracks Medical Clinic, Rehabilitation and equipping of Yundum and Fajara Barracks medical laboratories, procurement of two vehicles, lab equipment, HIV test kits, office equipment and furniture, opportunistic infection drugs and medical consumables, to mention a few.

He said the department had linked them with project cure to mobilize more resources for GAF Medical Services, thus the rationale behind this occasion.

“This is a clear testimony that DHAPP is a genuine partner and true friend of The Gambia Armed Forces and therefore deserves reward,” Major Touray said.

He therefore recommended the department of DHAPP and Project Cure to be added to the list of friends of Gambia Armed Forces if not yet done and be awarded appropriately.

He assured that the items would be used as expected, adding that in the coming weeks a lot of changes would be observed in their health facilities, particularly Fajara and Yundum Barracks clinics.

Ambassador Michael R. Arietti, Charge d’ Affairs at the US Embassy in Banjul, thanked the American NGO Benevolent Health Care Foundation which donated the medical equipment and supplies to the Gambia Armed Forces.

He noted that the Centennial, Colorado-based Benevolent Health Care Foundation is one of the largest non-profit organizations in the world that delivers medical supplies and equipment to developing countries.

“This container is one of the two being donated to the Gambia Armed Forces by the Benevolent Health Care Foundation. The second one is expected to arrive in Banjul next week Wednesday,” he said.

Ambassador Michael R. Arietti, US Charge d’ Affairs, said that DHAPP had been working with the Gambian Armed Forces to continue expanding its prevention and testing programme.

Over the past three years, he noted, DHAPP has built a strong partnership with the Gambian Armed Forces, National AIDS Secretariat and the National Laboratory.

He said that through this partnership, DHAPP has continued to accomplish its mission to increase awareness and reduce infection rates of HIV.

Colonel Hena Sambou, director of Admin and Logistics at GAF, said the American Embassy has assisted and continues to assist the Gambia Armed Forces in training her personnel both in-country and overseas. The American Embassy had collaborated with the Gambia Armed Forces in many fronts, ranging from renovation of GAF medical facilities, military training, both locally and overseas, military exercise and operation in the maritime domain and on-shore, she added.

Colonel Sambou said the two had also collaborated in multinational exercise and many areas of mutual benefits.

She further stated that the medical equipment handed over to the Gambia Armed Forces would be used in the diagnosis cure, mitigation, treatment and prevention of diseases.

She added that the items would strengthen health services delivery in the Gambia Armed Forces, as well as in their families and the immediate communities they serve, which would go a long way in strengthening government efforts and desire to ensure a healthy and capable nation.

She seized the opportunity to implore the Gambia Armed Forces medical services to employ efficient medical stores and equipment accounting and management system.

She assured the donors that the Gambia Armed Forces would forever be grateful to the Embassy, people and government of the United States of America for the donated items. 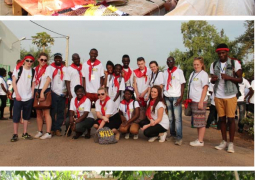