The American Embassy in Banjul through its Ambassador's Special Self Help Project yesterday disbursed over One Million Dalasi to thirteen beneficiary groups across the country, at a ceremony held at the Ambassador's residence in Fajara.

Speaking at the handing over ceremony, Barry Wells, US Ambassador to The Gambia said the occasion will put into effects the partnership between the beneficiary communities and the US government.

"I would like to congratulate each of you for your thoughtful submission to the Ambassadors Special Self Help Fund," he said.

Through these grants, Ambassador Wells stated, the beneficiary communities have committed themselves to bringing development to their communities.
"From previous experiences, we know the impact of these projects will result in an improvement in the quality of life in your communities," he added.

According to him, the signing of the agreement is only the first step in their partnership, while challenging them to be committed to it.

The fund, he added, is the only one of the links between individual communities and the US Embassy.

The Self Help Programme, Ambassador Wells further asserted is different from most development programmes, in that the projects are proposed and designed by the communities themselves.

He said that the contribution ensures that the communities stay involved at all levels and empowers them to take responsibility for future development, stressing that it is through such co-operation and community involvement that true development can come about.

The US diplomat further added that this year, they are providing over one million Dalasi to support thirteen communities initiated projects, covering the entire region in the country.

"The projects include wells to provide safe-drinking water for communities, provision of beehives for beekeeping association, provision of milling machine for village women groups and support for IT training for teachers to help improve Computer education in Gambian schools," he said.

Other project, he added is the renovation of some classrooms in two schools in the provinces and support to the national library.

Speaking to one of the beneficiaries shortly after the signing ceremony, Mr. Nfamara Jawneh of Barrow Kunda Beakanyang Kafoo commended the US Government through their Embassy in Banjul for making a difference in the lives of rural Gambians.

The project, he added, is a clear manifestation of their government?s commitment in helping to reduce poverty in The Gambia. 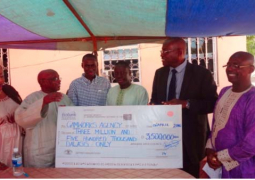