The US Embassy in Banjul, in partnership with the American Chamber of Commerce (AmCham), hosted a three-day entrepreneurship workshop in Fajara from 31 March to 2 April 2014 for 30 Gambian men and women under the age of 35.

During the workshop, participants from the Young Entrepreneurs Association (YEA), Gambia Chamber of Commerce and Industry (GCCI), Gambia Import and Export Promotion Agency (GIEPA), and the American Chamber of Commerce received hands-on training on developing product ideas and business plans.

The workshop was conducted by Mr Juan Casimiro, a Dominican-American businessman, who has conducted entrepreneurship and leadership workshops all over the world.

Mr Casimiro motivated the youth to become community leaders, small business owners, and to create jobs in The Gambia.

He also shared his own motivational stories and best practices, which helped participants to develop their own ideas for products, services and business plans.

The workshop bolstered the skills of the participants to become entrepreneurs, as he gave them the added confidence needed to start their own businesses.

The Enterprise Support Officer at the Gambia Investment & Export Promotion Agency (GIEPA), Njundu Badjie, thanked the participants and encouraged them to visit GIEPA for their business registration needs.

He noted that the income tax deposit waiver is in effect and that registering a business is getting easier for aspiring owners.

He also informed participants of a new business plan competition through GIEPA and the Ministry of Trade, Industry, Regional Integration and Employment, where entrepreneurs can win cash awards.

He discussed the importance of entrepreneurship and innovation for youth, and noted that the Government of The Gambia is taking concrete steps to encourage confidence for startups and new businesses.

Deputy Chief of Mission, Rick Yoneoka, reminded students about the importance of social networking and the role of entrepreneurs in contributing to the growth of nations.

“Innovation and entrepreneurship are cornerstones of any economy. In The Gambia and other Sub-Saharan African countries, entrepreneurship can serve as a key factor in unlocking economic potential and lifting people out of poverty.”

He continued: “We have already seen the positive dividends of entrepreneurship around the world, including right here in The Gambia, where the creativity and dynamism of a nation’s population creates the foundation for entrepreneurial activities to flourish.”

Yoneoka also reminded the students that President Obama has allocated resources to train 500,000 new entrepreneurs in the next three years in 1,000 cities around the world.

Additionally, US Embassies in Africa will send 500 young Africans, including around 10 Gambians, to participate in President Obama’s Young African Leaders Initiative to support young African leaders as they spur growth and prosperity at home.

Similarly, four female entrepreneurs from The Gambia have participated in the African Women Entrepreneurship Program (AWEP) to promote business growth, increase trade both regionally and to U.S. markets through the African Growth and Opportunity Act, and to become empowered to be the voices of change in their communities. 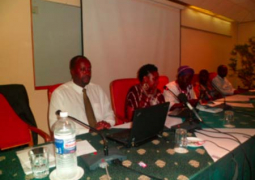