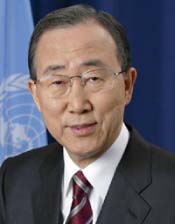 It has traditionally been marked throughout the world by meetings, discussions and exhibitions on the achievements and goals of the organization.

To mark the day, the UN Secretary General Ban Ki-moon has delivered a message. Bellow we reproduce the full text of his message:

On United Nations Day, I express my great appreciation to the millions of people throughout the world who believe deeply in our work for peace, development and human rights - and who uphold our ideals and help us achieve our goals.  To all of you - friends and fellow citizens of the world - I say: thank you.

Sixty-five years ago on this date, the founding Charter of the United Nations entered into force.  Every year on UN Day, we reaffirm our global mission. We reassert the universal values of tolerance, mutual respect and human dignity. And we recognise the progress we have made together: gains in literacy and life expectancy - the spread of knowledge and technology - advances in democracy and the rule of law.

But above all, UN Day is a day on which we resolve to do more. More to protect those caught up in armed conflict, to fight climate change and avert nuclear catastrophe; more to expand opportunities for women and girls, and to combat injustice and impunity; more to meet the Millennium Development Goals.

Last month’s MDG Summit at the United Nations generated political momentum as well as financial commitments that are especially significant in these difficult economic times.  I am determined to press ahead as the 2015 deadline approaches.

Despite our problems, despite polarization and distrust, our interconnected world has opened up vast new possibilities for common progress.  Let us commit to do even more to realise the great vision set out in the UN Charter.