As preparations for this year's World Malaria Day gains momentum, the United Nations Secretary-General Ban Ki Moon, in his statement, has called on all to be more vigilant in order to sustain the current gains in the fight against malaria.

Below we reproduce the full text of the message:

"Two years ago, I called for malaria prevention and treatment programmes to be made universally available to at-risk populations by the end of 2010.  This World Malaria Day brings much cause for satisfaction.  In a very short time, the world has gone from simply trying to hold malaria at bay to the realistic goal of delivering effective and affordable care to all who need it.

Furthermore, the scientific community has set a research agenda for developing the tools and strategies that will eventually eradicate malaria for good.

Since 2003, international commitments for malaria control have increased more than five-fold to $1.7 billion in 2009.  Though still far short of what is required, these funds have supported a dramatic expansion of malaria control interventions.  Those countries that have been able to provide bed nets and treatment to significant proportions of their populations have seen malaria cases and deaths fall by as much as 50 per cent.  Overall child mortality rates have declined too.

But our optimism must also be leavened with caution.  Malaria is a tenacious foe.  To sustain current gains we must be vigilant.  Parasite resistance to anti-malarial medicines is a considerable threat, and the use of artemisinin-based monotherapies is the principal force behind its spread.  I therefore urge the global community to act swiftly on the 2007 World Health Assembly resolution to remove all oral artemisinin-based monotherapies from the supply chain.

The global campaign against malaria has shown what is possible when the international community joins forces on multiple fronts to tackle a disease that takes its heaviest toll on poor and underprivileged populations.  Strong commitment has sparked innovation: creative initiatives have facilitated the delivery of massive numbers of mosquito nets; ground-breaking partnerships are developing new malaria medicines and making existing medicines more accessible and affordable.  The challenge now is to ensure that all who are exposed to malaria can receive quality-assured diagnosis and treatment.

The advances of recent years show that the battle against malaria can be won.  Interventions have made a difference.  Development aid for health has been shown to work.  This also gives us great cause for optimism for reducing child mortality and improving maternal health.

In September, I will convene a summit to review progress towards the Millennium Development Goals and formulate an agenda for action for the time that remains until the agreed deadline of 2015.  On this World Malaria Day, let us take inspiration from our successes.  They tell us that, with commitment and resources, we can eradicate malaria and achieve all our global development objectives." 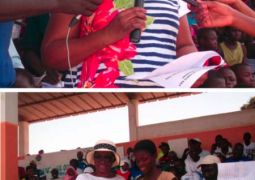