Jallow was alleged to have assaulted one Isatou Marenah, a police officer, by slapping her while in the due execution of her duties on 13th October 2010 at Nusrat Junction in the , a charge he denied.

Testifying under cross-examination, officer Marenah told the court that the accused, Pa Jallow, used his right hand to slap her on her right cheek.

When counsel Badou Conteh put it to her that it is not possible for one to use his right hand, and slap on the right cheek, the witness responded that the surprise slap came when she gave her back to the accused, while going towards the supermarket.

As to whether the shop was part of her duty post, the witness answer in the positive.

Counsel further put it to her that she was not speaking the truth, because the shop was not part of her place of duty, since her duty post was at the junction.

The witness then told the court that she was directing the traffic at the time, got thirsty and eventually went to the shop to buy water to drink.

"I then met with the accused at the door of the shop, where he (the accused) slapped me in the presence of the shopkeeper, and one man," she told the court.

She maintained that she was not directing the traffic at the time she was slapped by the accused person.

The case was at that juncture adjourned till 15th November 2010.

Darboe & Co trial: State to decide whether or not to close case 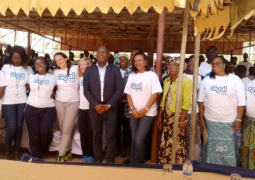