It is generally believed, wrongly or rightly, that wisdom is the property of the aged. Yet, a Wollof adage says ‘if you lose a needle in a haystack, a young or old person can find it.’ Was David being rude when he declined the king’s armoury? Didn’t he have the fear of authority in him to have told the king to his face, ‘I cannot go in these.’Not really! David had reasons for not pursuing his course clad in heavy armoury. God was going to use him mightily and He had to accomplish an impossible feat with the least likely weaponry.

We have seen how Saul’s heavy armoury would have slowed down David’s movements and mobility immensely. Not only would he have looked odd but every step would have been very clumsy. Rightly so, because he himself avowed: “I am not used to them.”

“I cannot go in these” meant that if David had terraced Goliath dressed in the king’s armoury, all the credit would have been given to king Saul for arming him and not to his prowess as a fighter. For that reason he declined all assistance. What would then be his next move: face Goliath with his bare hands? That would have been nonsensical, even suicidal.

That was exactly what David did when he picked up five stones from a nearby brook and reached for his sling from his bag to fight a giant. All the odds it seemed were against him, it was palpable even, except that David knew in whom he had put his trust. “You come against me with sword and spear and javelin, but I come against you in the name of the Lord Almighty, the God of the armies of Israel, whom you have defied.” (1 Samuel 17:45)

Under the anointing David had prophesied: “This day the Lord will hand you over to me, and I’ll strike you down and cut off your head. Today I will give the carcasses of the Philistine army to the birds of the air and the beasts of the earth, and the whole world will know that there is a God in Israel.” That was exactly how it happened.

The foolish things of God

“So David triumphed over the Philistine with a sling and a stone; without a sword in his hand he struck down the Philistine and killed him.” (1 Samuel 17:50) Unlikely but true. God makes the impossible possible. When we put our trust in the Lord God, He will fight for us. “For the battle is not yours, but God’s.” (2 Chronicles 20:15b)Who would have thought that with a sling and a stone David could have brought Goliath to the ground? This is how God works. His ways are past finding out.

When the Egyptian army hotly pursued the Children of Israel soon after they departed Egypt on their way to the Promised Land, they did not think it was folly to do so. God had earlier declared that He would use Pharaoh to show His glory to the whole world. “But I have raised you up for this very purpose, that I might show you my power and that my name might be proclaimed in all the earth.” (Exodus 9:16) The name of the God of Israel spread all over the ancient world and it drove fear in the hearts of all those who encountered them on their way to the Promised Land. “But God chose the foolish things of the world to shame the wise; God chose the weak things of the world to shame the strong.” (1 Corinthians 1:27)

The unprotected forehead of Goliath

What gave David victory? I heard a renowned man of God from Nigeria attribute David’s victory to God’s wisdom. Despite the fact that Goliath was armed to the teeth; despite his military prowess coupled with his experience and his exploits, there was one weak spot – a major loophole - that would cause his downfall. David’s sling pitched the stone right into Goliath’s unprotected forehead; he lost consciousness. “The stone sank into his forehead and he fell facedown on the ground.”(1 Samuel 17:49)End of story.

However mighty our goliath is or may be, he is not the almighty. Whatever form our problem will take, let it not be a stumbling block to our victory. We serve a God who is above all gods. Nothing can be considered more powerful than God. Everything in heaven or on earth must bow before Him, because He has the final say.

The account of David and Goliath is fraught with lessons of life that can serve as pillars for us to lean on in our walk with God. Here are a few.

a) Do not let anyone despise your youth. Your age should not be a hindrance to rescuing others in need of deliverance. Only David knew what was burning in his heart for him to accomplish. God was going to use him mightily and he trusted God for this and he overcame.

b) Do not venture blindly into defeat. No amount of enthusiasm could have sufficed for David to conquer Goliath. His self-assurance had a lot to do with it and not his credentials. That he set out to lift God’s name high by his victory is what mattered. Henceforth His name will be glorified.

c) Do not let the generation gap seal your lips. Speak up, have the courage to say what you feel about something. Do not compromise because of fear.

d) Put your expertise to the test particularly when others decline to take up their crosses.

e) The Bible teaches that you can do all things through Christ who strengthens you. Therefore be sure of the One in whom you believe.

f) Don’t let someone else dictate your destiny.

g) Despite people’s good intentions, do not conform. Let God’s agenda be uppermost in your mind.

h) Stop towing the line, trying to step into people’s shoes, you may not always fit in them; rather blaze a trail.

i) Remember you cannot be what you are not. David cannot be a Saul. He might have looked ridiculous facing Goliath with only a sling and some stones but that is what he was familiar with and adept at and it gave him the desired results.

j) Know your potential and its limits

k) Whatever your background, it is whether you are approved of God that matters. Using an insignificant sling and stone as weapons David brought about Goliath’s disgrace. He believed his God was “able to do immeasurably more than all we ask or imagine, according to his power that is at work within us.”(Ephesians 3:20) 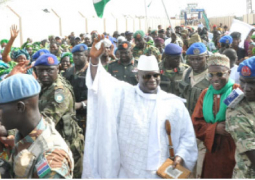 Most of the venues for the Olympic Games are 95% ready: GNOC’s safe de mission