The alleged offence on count one revealed that, the accused persons Momodou Bah and Giddeh Secka on 22nd August 2009, at Sanyang Village in Kombo South, Western Region conspired to commit felony to with stealing.

While count two stated that, the accused persons on the same date and place jointly stole a bull, valued at D25, 000, being the property of one Nyima Sambou.

His application was granted and the accused persons were subsequently remanded in custody at Mile 2 State Central Prison until the next adjourned date. 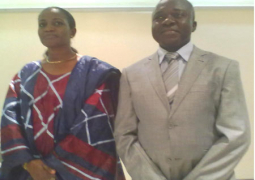