The Government of The Gambia through the Ministry of Health has inaugurated two border health posts at Amdallai and Kerr Ali border post in North Bank Region on 4 and 5 August and 2016.

The government has also upgraded the Essau Major Health Centre to a District Hospital, which will be taking in patients that will have been transferred to Banjul from the region, except the most complicated ones.

The new development drive is aimed at giving universal health access or coverage to every Gambian.

The occasion was graced by cabinet ministers and government officials, including the APRC National Mobilizer.

The project is supported by the Gambia government in collaboration with the people of Japan through the Japanese Ebola Project under the coordination of the United Nations Development Programme (UNDP) Country Office. It seeks to enhance Preparedness and Response to Public Health Emergencies.

Addressing the gathering at the upgraded health facility in Essau on August 4, Hon. Fatou Lamin-Faye, Minister of Basic and Secondary Education, deputizing for President Yahya Jammeh, said that access to universal health coverage is the primary goal of the Gambia government and the 22nd July Revolution

She pointed out that her government will continue to increase access to health services by expanding and upgrading health facilities in the country.

According to her, the newly inaugurated health facility will reduce the burden on the beneficiary community of people travelling long distances to look for tertiary health care services including Emergency Obstetric Care, access to high capacity diagnostic service, such as x-ray facilities, 24-hour accident and emergency services, Neonatal Intensive Care, Paediatric, postnatal and pharmacy service among others.

She said the health post will significantly cut down the number of referral cases from Essau to Edward Francis Small Teaching Hospital (EFSTH).

She calls on the beneficiary communities to take good care of the facilities as it is theirs, saying in the event of any disease in the community they could be the first to suffer from it.

She also calls on them to be regularly vigilant to report any suspected cases to the health post, in order to protect and control any incidence of disease.

Dr Omar Sey, in his remarks, said that access to universal health coverage is the primary goal of the government and his ministry as enshrined in the National Health Policy 2012-2020.

He said the health facilities expansion project was initiated by the Government of The Gambia to improve access and quality of service for the population by expanding and upgrading some health facilities in strategic locations in the country and building new ones.

Alhagie Queen Jammeh, Governor of North Bank Region (NBR), said the initiative is a clear manifestation of the Gambia government’s efforts at taking health care service to the doorstep of all Gambians, adding that the hospital would go a long way in alleviating referrals from Essau to Banjul and Farafenni.

Hon. Fatou Lamin-Faye, Minister of Basic and Secondary Education, stated that “having a facility of this will help the country’s efforts in the detection and reporting of diseases of public health importance which is the ultimate goal of the Ministry of Health and Social Welfare under the Government of The Gambia”.

According to her, the Ebola crisis in the sub-region was a wake-up call for the region thus it has resulted in the strengthening of disease surveillance through the construction of points of entries at the official border points.

Papa Sam, desk officer of Amdallai POE, in his remarks, said: “This new facility will help the country in its continued fight towards detecting and reporting of diseases of public health importance.”

The Alkalo of Kerr Ali, Alieu Bittaye, highlighted the importance of the facility, saying “it cannot be overemphasised”.

“Amdallai is an entry point in the country and this new facility will help to prevent people coming into the county with any form of diseases,” he said. 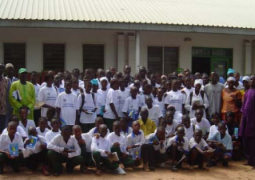 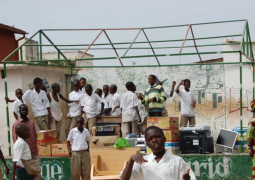