During the congress the task force that was overseeing the affairs of the committee presented their final report and the achievements registered during their tenure of office.

Addressing congress delegates at the occasion Inspector Kemeseng Marina urged the youths to desist from using the back way to and engage themselves in the socio -economic development of the country.

Speaking shortly after the election, the newly elected president of the association, Inspector Ba Ensa Jawara, stated that among his plans would be to bring the youths together and also to embark on the new development of the village 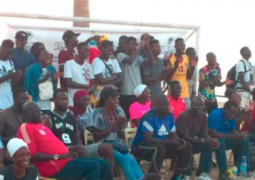