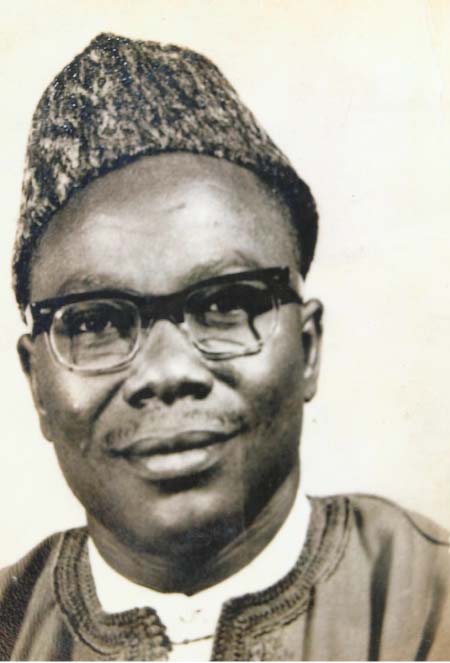 Headmaster Alghali devoted almost half a century to promoting education in Sierra Leone.

Mr Alghali rose through the ranks from a junior teacher to headmaster at two of Freetown’s municipal primary schools, Islamia Municipal and East End Municipal. He later became inspector of schools before his retirement.

Mr Alghali’s long and distinguished career was defined mainly by his passion to ensure that students not only learn to read and write, but also strive to embrace and value the essence of their being to school. His personal motto and advice to all students is, Education is not just about learning to read and write or getting a diploma or degree…it is essentially about using knowledge gained to refine one’s way of life for the general good of society.

In all of the schools in which he served, including Koyema Secondary school in southern Sierra Leone where he was a teacher, Mr Alghali made it a duty to encourage other teachers to develop and put into practice extracurricular activities in order to enhance teacher-student relation and also to enable teachers to fully understand the potential and interests of their students. He inspired teachers to always regard themselves as leaders worthy of emulation.

During his days as headmaster at Islamia and East End Municipal, where he served for over 40 years, he organized annual teacher-leadership programs, an idea borne out of his belief that teachers must lead as well. He used to say that teachers who regard themselves as leaders and role models of students are more likely to better pave the way for students who become great men and women of society.

Mr Alghali’s drive for education could be described as innate. At the tender age of 3, he had developed passion for both secular and Islamic education. He once remembered how he used to get closer to his dad whenever the father was reading something, be it a book or a newspaper. His father encouraged the practice by regularly reading to him aloud and teaching him to read and write in both English and Arabic. The practice enhanced his interest and understanding of both languages.

As young as he was, he used to love to speak in English, always, a practice he also enforced in school as a teacher and as headmaster. A group of students at Islamia once described him as the Englishman.

In her tribute at his funeral in Greensboro, North Carolina where his remains were buried, Doctor of Dental Surgery and owner and chief dentist of Yardee Dental in Maryland, Haja Dr. Jemi Sanusi – herself a sister of headmaster Alghali, described him as an education-perfectionist. “His dictions in both English and Arabic were second to none and his vocabulary was to the point.” That was further manifested in his uniquely innovatively fine-tuning of his call to prayers among other Islamic practices.

Referring to the late man as Alpha-the-speaker; another alias he was also to be identified by, Dr Jemi Sanusi said he had an ability to coin English phrases in his own way with style. She recalled him once saying, ‘“…the answer was emphatically, No. But now, it is unanimously, Yes!”’ meaning, we disagreed to agree.

Dr Sanusi paid her tribute also in the form of poetry by reading stanzas of A Psalm of Life, an 1838 poem by Englishman Henry Wadsworth Longfellow. The poem encourages all to make haste and live life the fullest in a worthy way.

Tell me not, in mournful numbers,

Life is but an empty dream!

For the soul is dead that slumbers,

And things are not what they seem.

Life is real! Life is earnest!

And the grave is not its goal;

“Dust thou art, to dust returnest,”

Was not spoken of the soul.

Lives of great men all remind us

We can make our lives sublime,

And, departing, leave behind us

Footprints on the sands of time;

Footprints, that perhaps another,

A forlorn and shipwrecked brother,

Let us, then, be up and doing,

With a heart for any fate;

Learn to labour and to wait,

Dr Jemi Sanusi hoped his life has left what she described as a footprint on the sand of time.

Chief Imam of Jamiul Atiq Mosque, Alhaji Hassani Karim in his comment in Freetown during Koranic readings in honor of the late deputy Imam praised him for being a man of God who was steadfast, resourceful and diligent.

Headmaster AMO Alghali graduated with a Bachelor’s degree at Fourah Bay College University of Sierra Leone. He was part of the generation of Fourahbayans who believed that with education, be it conventional or Islamic, human beings can move mountains.

His was a generation of men and women who defied tremendous obstacles, travelled far and wide in search of education.

He, himself moved many mountains, refining the potentials and paving the way of many with whom he crossed paths including this writer.

A friendly and polished gentleman, man of tremendous authority, he was very reassuring and always full of self-confidence. Notwithstanding, he always put service before self. He will be remembered also for his deep sense of discipline that led to him being nicknamed ‘In My School’, underscoring his no nonsense stance under his administration at Islamia and East End Municipal.

In May 2013, Headmaster Alghali was honored in New York City with the Distinguished Educationist Award by the US-based Fourah Bay Foundation USA. He became the first person to be so honored by the organization.