A ten-day training of trainers on Local Government Act for Local Government Authorities, Community Base Organisations and community members in the Western Region recently kicked-off at the Child Fund office in Brikama

Orgainsed by the Child Fund, the training is funded under the good governance fund of the World Bank funded Community Driven Development Project under the Department of Community Development.

The objective is to increase understanding of the Act among Gambians so as to increase participation as stakeholders in the development of the region and the country as a whole.

In his opening remarks, Mr. Momodou Jallow, who deputised for the National Director of Child Fund in The Gambia, said Child Fund has been one of the trusted organisations to implement the project.  He noted that child fund went into the project with CDDP, because it shares among other things, issues of community empowerment - putting people in control of their own development.

|We all believe that we cannot develop when we are not in control of our own development," he said, noting that it is the people themselves who can help the development process. This, he added, can be realised through empowerment of people through capacity-building and the formation of the linkages.

According to him, the challenges of development are many and ever-changing in this world and for any organisation or agency to make any headway, one must work in collaboration with other stakeholders.

"To back this belief, one of our six key strategic directions is to build influential relationships that support our mission and purpose by influencing policy and increasing resources," he added.

He further stated that one of the guiding principles of the Child Fund is proactively connecting and collaborating with other federations.

"The project we are about to start is to build the capacity of trainers who will in turn go into the field to enhance the capacity of the people on the LGA Act and other structures," he said, adding that the training is facilitated by the staff of the National Council for Civic Education, who is mandated by the government to build the civic awareness of the populace.

He commended the Community Driven Development Project (CDDP) for the trust and confidence bestowed on them to be partners in the implementation of this important project, while expressing hope that it is going to be the beginning of a longer relationship.

For his part, Mr. Lamin Jarjue, the Co-ordinator of CDDP underscored the significance of the Local Government Act, which he said, seeks to establish and regulate a decentralised local government system for The Gambia.

This, he added, is grounded on the fact that decentralisation and local governance are increasingly recognised as basic components of democratic governance, since they provide an enabling environment, in which decision making and service delivery can be brought to the people.

Mr. Jarjue added that a greater degree of accountability, responsiveness, participation and effective decentralisation can make a big difference, as it makes the provision of local services more effective through community participation in decision-making, planning, implementation and monitoring.

Other speakers at the occasion included Lamin Sanneh, Governor of the Western Region and John P. Bojang, the Chairman of the National Council for Civic Education.

The Gambia: A safe haven for birds 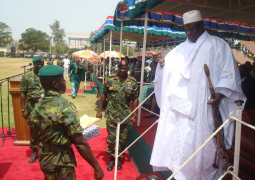