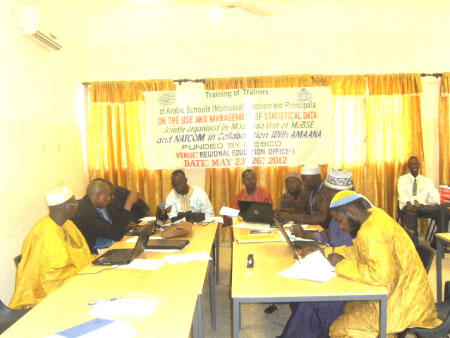 Through ISESCO Funding, The Gambia National Commission for UNESCO jointly organised with the Madrassa Unit of the Ministry of Basic and Secondary Education in collaboration with the General Secretariat for Islamic Arabic Education (AMAANA) a Training of Trainers workshop of Arabic Islamic (Madrassa) Teachers and Principals on the Use and Management of Statistical Data.

The workshop, which took place at the Regional Education Office in Region one from 23 to 26 May 2012, saw the participation of principals and senior teachers of several Madrassa schools in The Gambia, personnel of the Planning Directorate of the Ministry of Basic and Secondary Education and staff of the teacher training institution (Gambia College).

During the opening ceremony, Mr Yahya Al-Matarr Jobe, the acting Secretary General of UNESCO NATCOM, welcomed everyone and indicated that the main sponsor of the event, the Islamic Educational, Scientific and Cultural Education (ISESCO), has agreed to support this type of training because the need to start collecting data from Madrassa institutions have become very important today to drive policies and help to better document the important participation of the Madrassas.

Oustass Husainou Touray, head of the Arabic Islamic School of Education Programme at the MoBSE, expressed sincere thanks to the Director General of ISESCO and his staff for providing such a support.

He said the workshop was unique in the sense that it helped to provide the necessary skills in data computing and management.

He encouraged participants to play a positive role in the process and work hard in sharing their knowledge.

Oustass Essa Darboe, Secretary General of AMAANA, thanked ISESCO for the support and UNESCO NATCOM for organising it. He renewed AMAANA’s commitment in helping in the process of ensuring that all Madrassa schools start collecting data and sending them to AMAANA.

He hoped the Ministry of Basic and Secondary Education will also support further training to guarantee that there is much stronger understanding of data collection and processing within the Islamic and Arabic schools.

Muhammed Jallow, Director of Planning at the Ministry of Basic and Secondary Education, emphasised the necessity for such training and welcomed it.

He said that at the level of the MoBSE, it remains difficult to get accurate data, if any, on Madrassa schools and this affects all the planning that needs to be done for the Madrassa sector.

He said the workshop will be one among many that will be conducted to train as many senior staff of the schools as possible in data collecting and processing.

He reiterated the Ministry’s commitment to help so that in the very near future data coming from the Madrassa will be accurate and professional.

Many of the participants found the workshop very useful.

Aboubacarr K. Darboe, secretary of the Taddamum Islamic Centre responsible for analysing the results, said he attended several workshops but this was the missing link.

Now he feels more assured in analysing the results and expressed commitment in sharing his knowledge to his colleagues.

The only female participant, Isatou Sowe, teacher at the Muslim Senior Secondary Islamic School, expressed deep satisfaction about the workshop.

However, she encouraged other women to take the chance, and appealed to the organisers to invite more women to such training. 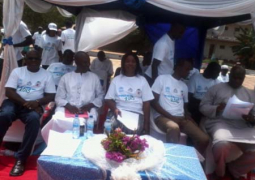 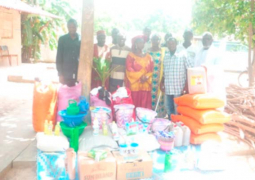