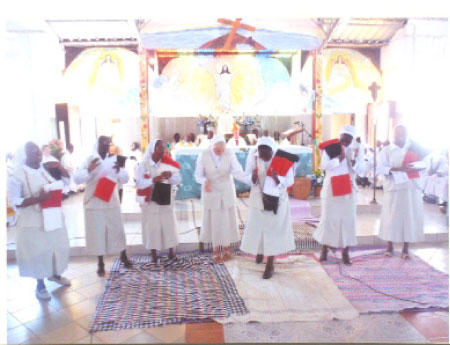 On the 20th August 2011, two young ladies, Anna Kanfudi and Harriet Mendy were professed as Presentation of Mary Sisters. In that ceremony the two young ladies only became temporary members of the congregation.

On Saturday, 12th November 2011 another three sisters of the same congregation were witnessed in St. Theresa’s Church, Kanifing making their final vows. The three sisters were sisters Bernadette Bah, Josephine Necky and Rosaline Colley. The final vows they made signified that they have committed themselves to religious life permanently in their congregation. The vows they pronounced were obedience, chastity and poverty. All these vows are spiritual virtues that make the Sisters committed to their faith, their Church and their religious Congregation. The vows are true signs of witness in today’s fast developing world which sometimes loose sight of true religious and godly values.

The ceremony and mass of the final profession began at 10am. It was presided over by Bishop Robert Ellison, the Bishop of Banjul, 25 Gambian and Senegalese priests, hosts of religious Sisters from the two countries as well and many parishioners. The St. Charles Lwanga Junior Choir of Fajikunda animated the mass through singing.

During mass the three Sisters were called out and presented before the Bishop. There in the presence of their , Sister Sarian J. Gomez, they pronounced their permanent commitment through the vows of obedience, chastity and poverty. The ceremony at this time was very moving and some relatives could be seen in tears of joy and sadness.

After the pronouncement of the vows, the sisters lay prostrate on the floor near the altar. The litany prayer of the Saints were chanted in the Serere language. This was beautifully done and it lasted for twenty minutes.

The main rite of the final profession was the giving of the rings to the three Sisters. The Sisters wore the rings that were given to them as a symbolism of their permanent commitment to the Church, their faith and their religious congregation. As in marriage where two people commit themselves for permanence, the three sisters also commit themselves for the rest of their lives to God in the service of the Church.

The day’s activities continued with a lunch that was held at the Saints Peter and Paul hall, Bakau. The Bishop, the Priests, the Sisters and their families were treated to a sumptuous meal where everything was in abundance. There was also available musical entertainment of traditional, religious and gospel music to make the light footed dance and enjoy the day.

The presentation of Mary Sisters through their Superior Sister Sarian J. Gomez marveled at the success of the day and thanked God. The day was also made memorable as one of their old sisters, Sister Madeleine Mendy was announced to have been edified as the first Vice Assistant to their Superior General in . Sister Madeleine will leave and take residence in at their generalate and mother house. This appointment is the first ever that has been given to a Gambian Sister.

The Christian Panorama wish to congratulate Sisters Rosaline, Josephine and Bernadette for this major step in their lives. May they live many spiritually fruitful and happy years in the Religious life.