It can be seen that the Noble Prophet(s) used to advise people to respect every individual. He would preach civility, peace, and security among Muslims, and used to advise men to be good to women. Likewise he used to preach that one ought not to betray their ally and that human etiquette must be observed during war. He would say that good attributes-such as mutual peace, good speech, observance of familial ties, prayer in the depth of the night, soft words, and tolerance with people against whom we have grudges in our hearts-have to become widespread in the Islam community. These are attributes that we are in need of today more so than any other time.

Four: During Times of Difficulty, the Noble Prophet(s) used to Seek Assistance from Human Emotion

When we look at the Noble Prophet’s conduct and comportment, we see that he was full of affection and love. He used to work alongside his companions in all ventures. He would be able to rouse their vigor and zeal so much so that they would forget the hardships of the way and get drawn towards self-sacrifice and altruism. In this regard, the third caliph ‘Uthman ibn Affan, said:

I swear upon God that we were in the company of the Noble Prophet(s) both at home and on journeys; he used to visit our sick people, bury our dead, take part in war together with us, and would to be content with whatever we had. (Ibn Hanbal vol. 1, p. 70, Razi, sermon no. 100)

It has also been reported that Imam Sadiq (‘a) said:

Poor and indigent people used to spend their nights in he Mosque. One night the Noble Prophet(s) broke his fast with them near the pulpit. He used their own particular plate to break their fast-thirty men partook of the food from that plate and then went home (with the remaining food) by which their wives were also fed and their hunger was satisfied. (Majlisi, vol. 16, p. 219).

The Noble Prophet(s) and his companion were together digging the trench of Khandaq and suffered many inconveniencies, one of which was acute hunger. It has been reported that Imam Rida (‘a) quoted his forefathers as saying that Imam ‘Ali (‘a) said:

The most impressive aspect of the Noble Prophet’s conduct was that on sensitive matter, he would interact in an affectionate and intellectual manner. He used to make people ecstatic and awaken he vigor and zeal in their hears, encouraging them towards altruism and self-sacrifice. Imam Ali (a) says:

With the Noble Prophet(s), we used to go to war and kill out fathers, brother, and uncles [who were antagonistic towards Muslims and Islam] in the way of God. This would show our faith, obedience and fortitude, prove our endurance in the face of pain, and increase our efforts in the holy war against the unbelievers. Each one of us would bravely face his rival and courageously fight the unbeliever until he killed him; in these fights sometimes we would kill the rival and a times we would lose the fight. When God saw our firmness and rightness, He humiliated our enemy and made us victorious. (Nahj al-Balagha, p.92).

Hereunder we will mention two interesting examples of the Prophet conduct [during difficult occasions]:

It has been narrated in history that the Qurysh after killing and defeating the Muslim soldiers in the Battle of Uhud, left the battlefield in jubilation on account of having achieved victory. When they reached an area called al-Ruha’, they realized (or rather, some of the evil-minded amongst them suggested it to them) that they would not reap the full benefits of this victory unless they returned to Madinah and massacre all the Muslims in accordance with the orders of their commander, Abu Sufyan. This news was relayed to the Noble Prophet(s), whereupon he began to mobilize the Muslims and prepare them for war. He encouraged and incited them to fight, arousing the strongest ideological feelings in them. Then he accompanied them into the battlefield. The Muslim soldiers, despite the wounds and blows they had suffered [earlier], left for war like wounded lions and arrived to an area they used to call Harma al-Aswad, ready for any kind of self-sacrifice for their beliefs. Abu Sufyn understood that it was not possible to defeat this excited and self-sacrificing group. When he asked Ma’bad al-Khaza’I what was transpiring in the Prophet’s camp, he answered, “I swear that I left Muhammad and his Companions very eager [for war] and zealously awaiting to fight you. “In Sirah ibn Hisham, it has been reported that Ma’bad al-Khaza’I said:

Muhammad and his companions are overfilled with valor and zeal to purse and fight you. Those who had left and abandoned him on that day have regretted their deeds and are [now] as overfilled with enmity against you as I have never seen before. (ibn Hisham, vol. 3, p. 108; Majlisi, vol. 20, p. 99).

In such a manner, he frightened Abu Sufyan so much that he sent a letter to the Noble Prophet (s) through his commander ‘Abd alQays informing the Noble Prophet(s) that he had changed his mind [with respect to fighting the Muslims]. At this the Noble Prophet (s) said, “I swear upon the God who controls my life that I had prepared them so well that had they carried out their wishes, the enemies would have been badly defeated.” Then twice he recited the Quran verse “Allah is sufficient for us, and He is an excellent trustee.”... 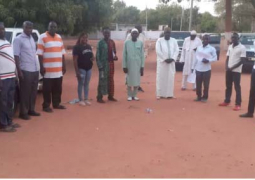