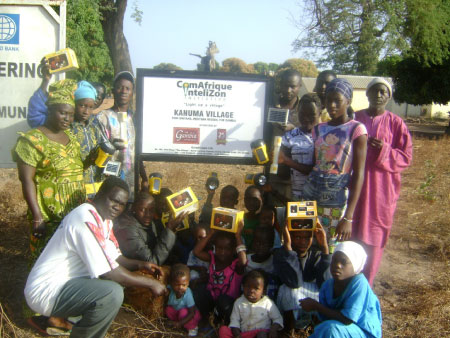 The ComAfrique-InteliZon Initiative on Saturday 16 February 2013 supplied solar lights to Kanuma village, Foni Bintang District, West Coast Region, sponsored by the Gambia Experience as part of its 25 years of operations.

The technology being provided by ComAfrique-InteliZon, aimed to increase the quality of life of the rural people all over Africa.

The eradication of the use of candles and kerosene lanterns that cause fire risks and bring health problems are some of the factors motivating the initiative.

“Safety from fire accidents however is not the only benefit that results from the usage of the distributed solar lights. The financial advantages from not having to buy candles bring great savings to the households,” said CEO Ram Mohan.

Ram Mohan, who also doubles as the Consul General of India to The Gambia, said they are trying to get rid of dangerous disasters, caused by fire outbreaks in the villages. He argued that solar is cheaper, safer, and produce better quality lights than candle.

“We are able to give light for 1 dalasi per day and the money is not paid to us, but to the village committees to ensure the sustainability of the project. We find a sponsor who will pay for the lights and this village is sponsored by the Gambia Experience Company,” he added.

“Rural communities are more responsible about the expenses as they do not have to buy the candles, yet they still have high quality lighting,” he added.

According to him, these lights lead to development as the school children can study at night without having problems.

“I am urging the villagers to take care of the lights as it becomes part of their long-term assets,” he said.

Dampha, the Sales and Implementation Coordinator, said in order to create long-term sustainability the villagers had agreed to pay 1 Dalasi per day and per light for the usage of the lights.

While stating that the payment contributes to a ZonLight fund, which in the following years would grow to take care of the replacement of batteries and lights after expiration, he said, if implemented carefully this concept will provide lighting for the villagers for the rest of their lives, with the possibility of a surplus fund which can be used for other village development projects.

Mr. Sulayman Beyai, the Alkalo of the village expressed delight at the development, as he stated, candles and kerosene lamps are now being replaced with solar.

Mrs. Mariama Manga, a committee member also emphasised that it is very important for the project to be made sustainable.

“This is where the commitment of every single villager becomes crucial. The Gambia Experience took us from the darkness and brought us to the light,” she emphasised.

Mr. Saikou Gibba, VDC’s Chairman also emphasised the need to take good care of the lights and then urged the residents to pay their contributions in time.