Whilst tests, trials and troubles may be God's way of breaking us, in order to melt, mould and build us up for perfection, it is not the only form of test to which we are subjected. Satan has a way of putting us through gruesome tests intended to ditch us for good. He is skilled at setting traps for us to fall into; for his mission is "to steal and kill and destroy." (John 10:10) He is ruthless and merciless in the way he goes about it. He would stop at nothing to bring about our downfall and ruin. He goes around like a roaring lion "looking for someone to devour." (1 Peter 5:8)

Whatever Satan would put us through, it is certain it is not like a dead end street, with no recourse. God has equipped us to be able to make a retreat. He has given us the wherewithal to fight back and not succumb hands down. The Bible teaches that "No temptation has seized you except what is common to man. And God is faithful; he will not let you be tempted beyond what you can bear. But when you are tempted, he will also provide a way out so that you can stand up." (1st Corinthians 10:13) Strictly speaking, there is no temptation we will face in this world that we should not be able to ward off or resist. God in His wisdom has provided a way out.

We succumb to temptation The Bible says, because we lust. "God cannot be tempted by evil nor does He tempt anyone; but each one is tempted when, by his own evil desire, he is dragged away and enticed." (James 1:13-14)

The apostle Peter exhorts us to resist the devil by standing firm in the faith. (1 Peter 5:9) This would bring an end to our sufferings and troubles because when we resist the devil he will flee. (James 4:7) When we endure the tests God puts our way we are the better for it.

We come out strong and edified.

The motive for Satan's trials is different. He is bent on seeing us fail in our Christian walk. He seeks our doom and would rather we miss the mark and end up in hell.

Satan lured Adam and Eve into trouble when disguised as a serpent he succeeded in seducing Eve to believe she can be a god also. "For God knows that when you eat of it (the fruit of the tree), your eyes will be opened, and you will be like God, knowing good and evil." (Genesis 3:5) This deliberate deception led to the downfall of our ancestors and their ultimate removal from the Garden of Eden where they were lords.

Satan will throw his fiery darts at you, but be assured that the God we serve neither slumbers nor sleeps (Psalm 121:4). "The righteous cry out and the Lord hears them; He delivers them from all their troubles." (Psalm 34:17) "The righteous may have many troubles, but the Lord will deliver him from them all; ." (Psalm 34:19)

At the start of His ministry, our Lord Jesus, soon after His baptism, went into the wilderness for a period of fasting and sober reflection that would last forty days. Satan had recognised his lordship and kingship and was ready to stall his march into victory over sin.

The first dart he threw at him was to test his ability to sustain hunger and whether like Esau he would fall for food. "If you are the Son of God, tell these stones to become bread."(Matthew 4:3) In the Old Testament, Esau the first born son of Isaac had fallen victim when to satisfy his hunger he sold his birthright to his younger brother. Jacob.

Jesus however, did not have to receive orders from Satan nor did he have to prove his sonship. That test failed bitterly when Jesus answered him; "It is written: 'Man shall not live by bread alone but on every word that comes from the mouth of God.' " (Matthew 4:4)  Food was not a priority for Jesus for Him to give in to temptations of this nature.

Satan made another attempt nevertheless. "He took Jesus to the holy city and had him stand on the highest point of the temple. "If you are the Son of God throw yourself down. For it is written: 'He will command his angels concerning you, and they will lift you up in their hands, so that you will not strike your foot against a stone." (Matthew 4:6)  Did He have to prove His power to Satan by following his instructions and showing what mettle he was made of? That attempt failed dismally as well for the Lord answered him in these terms: "It is also written: Do not put the Lord your God to the test." (Matthew 4:7)  On another instance, "The devil took Him to a high mountain and showed him all the kingdoms of the world and their splendour. 'All this I will give you, if you will bow down and worship me." (Matthew 4:9) Satan was out to ridicule Jesus so that He would fail His mission even before takeoff. What he did not realise early was that Jesus was not moved by earthly things nor the pleasures of this world. His spiritual ability to perceive things kept Him above what we humans would normally fuss about. This temperament stood him in good stead to combat the wiles of the evil one.  Jesus declared: "Away from me, Satan! For it is written: 'Worship the Lord your God, and serve him only." (Matthew 4:10)

We are tested for spiritual not physical growth that is clear. That is to say there is a reason behind every move of God every step of the way. When those times of tests, trials and troubles come our way, may we discern the works of His hand and may it affect our lives positively. 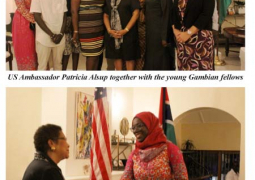