The Association of Non-Governmental Organisations (TANGO) held its biannual congress recently at the TANGO Conference Hall. The occasion is organised every two years to enable them to assess the association's state of affairs.

In the meeting, general members of the body reviewed the minutes of the last AGM that was held in September 2006. The general assembly which is comprised of the different local Non-Governmental Organisations (NGO) were also given the opportunity to access the various reports including the financial and the day to day engagements of the parent association, TANGO.

During the course of the congress, the Chairman of the Former Board, Wright Reverence Bishop Tilewa Johnson pronounced his intention not to run for a second term as Chair of the Board. The Revered Priest then retired from his post and the association elected a new board.

In an interview with The Point, Bishop Tilewa Johnson explained that this is the second time he was called in to help stir the affairs of the association and despite giving up his chairmanship he vowed to remain an active member of the board. The busy and revered priest elaborated on a project he initiated. The excellent programme planned to enhance the capacities and network a competent and determined civil society organisations of The Gambia so that they can together implement the mission of poverty eradication.

"Another pivotal point of the development I facilitated for the association was the one million dollar fund I managed to obtain for TANGO from the African Capacity Development Foundation", he told this reporter. Bishop Tilewa Johnson said this would most certainly help and the capacity will be increased effectively and efficiently. "I believe the new board will improve on the short comings of the outgoing board," he stated.

In his capacity as a priest, Bishop Tilewa Johnson advised members to unite and hopefully that will facilitate further growth of TANGO. 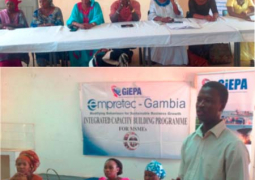 ‘EMPRETEC is out to promote entrepreneurship’