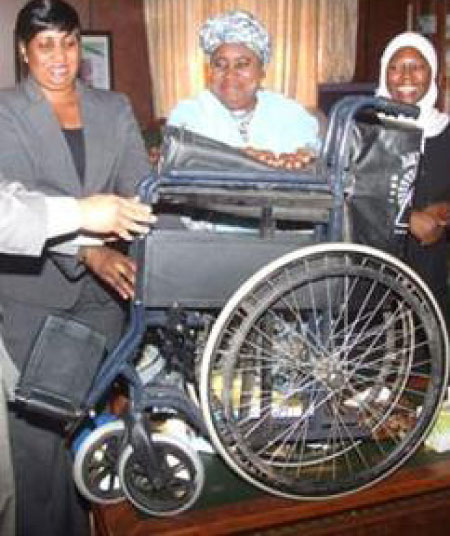 Samuel Chen, ambassador of the Republic of China on Taiwan (ROC) to The Gambia, on Wednesday presented 250 wheelchairs to the Jammeh Foundation for Peace (JFP).

The wheelchairs were donated by a Taiwanese NGO called Pu-Hsein Educational Foundation for onward delivery to health facilities and needy people across the country.

The wheelchairs were officially handed over to the Vice President and Minister of Women’s Affairs, Aja Dr Isatou Njie-Saidy, who also doubles as the chairperson of the JFP.

Speaking at the presentation ceremony held at the VP’s office in Banjul, Ambassador Samuel Chen said it was the third time the Taiwanese NGO had donated wheelchairs to The Gambia.

So far they have donated 750 wheelchairs to the country over the past years, he said, adding that the Foundation that made this latest donation is supported by a large Buddhist Community in Taiwan.

According to him, Buddism is among the religions with the highest number of followers in Taiwan.

Ambassador Chen further stated that the Foundation, which is very active in supporting charities, “is a very strong” NGO in Taiwan.

“We hope JFP will distribute these wheelchairs to needy people in the hospitals and clinics in the country,” he said.

The chief Taiwanese diplomat noted that even though The Gambia and Taiwan are not near neighbours, they are very close and have established very cordial and close relations in many areas over the years.

For his part, Bai Matarr Drammeh, a board member of JFP, expressed appreciation on behalf of the Foundation for the gesture.

Mr Drammeh acknowledged that Taiwan has over the years invited officials from the Gambia private sector to Taiwan on an annual basis.

“We know that you will continue to be of tremendous assistance to this country in the education sector and other areas. So we thank you for giving us that empowerment as far as knowledge is concerned,” he said.

“These two countries have been friends and will always be friends. We hope you will assist us in our drive to develop this nation because it is our intention to be like Taiwan someday.”

For her part, VP Njie-Saidy thanked the Taiwanese government through Ambassador Chen for the support.

She acknowledged that Taiwan has been involved in many sectors of the Gambian economy, such as health, agriculture, education and infrastructural development.

It would be recalled that the same Taiwanese NGO donated a 20-foot container loaded with 246 brand new wheelchairs to the JFP.

The ceremony was graced by the Executive Director of the JFP, Madam Nancy Njie and other board members of the foundation.

A Case Study Of Cellular Competition