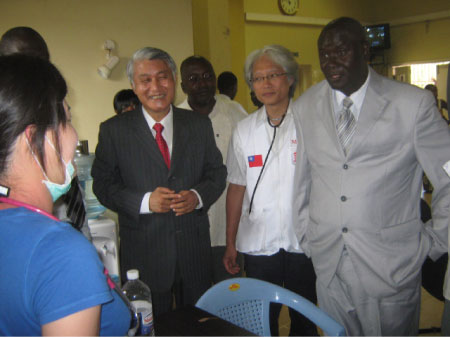 A seven-member medical team from in is currently in the country to offer free medical services to Gambians.

The team including three medical doctors and four nurses arrived in the country last week. They have since begun their humanitarian service at .

Officially welcoming the team at the yesterday, the Taiwanese ambassador to the , Richard Shih, thanked the medical team for the visit.

“The medical team came from a well respected hospital in , and they became in love with The Gambia last year when they came here, and decided to come back this year,” he said.

Shih described The Gambia as one of the best friends of , a relationship his country cherishes most.

“This is also a commitment of my embassy and country to work together with the government and people of the in promoting the welfare of the Gambian people,” ambassador Shih added.

He expressed hope that the medical team will come again to The Gambia next year.

The permanent secretary ministry of Health and Social Welfare, Sanna Dahaba, acknowledged the support the team is rending to Gambians at no cost.

“Your contribution to our health sector is great,” he said, and described as a dependable partner of The Gambia.

He revealed that, as at yesterday morning, some one thousand two hundred and sixty patients were treated by the visiting Taiwanese medical team, and that more people were still coming to seek for their service.

The chief executive officer of , Malang Ndong, commended the government of for their continuing support to the ’s development endavours.

He recalled that, last year, the same team provided treatment to hundreds of patients in The Gambia.

Wei-Tao Chen, the leader of the medical team, expressed happiness to be in the country once more.

“We are glad to be here to offer free medical services to Gambian people. It is also an opportunity for us to learn your culture and religion,” he said.