The President Elect, Ma Ying Jeou of was on Tuesday inaugurated in the presence of over 530 foreign dignitaries including Vice President Njie Saidy of The Gambia.

In his inaugural speech President Ma revealed some of his administration's policies with regard to , such as economic and political ties. However, he does oppose unification with Mainland .

President Ma Ying Jeou is the 12th president of . He replaces President Chen Shu Bian whom he defeated in the March 2008 General Elections. "What matters is not sovereignty, but core values and way of life," he said on Tuesday at the ceremony. "We hope that Mainland China will continue to move towards freedom, democracy and prosperity for all the people."  Ma also urged to seek reconciliation with in the international arena. 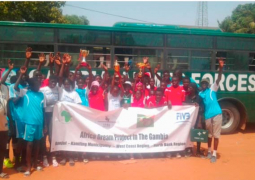