The Gambia National Olympic Committee, in collaboration with The Gambia Taekwondo Association and the World Federation, has organised a two-week taekwondo coaching course in basic competition technique for 14 Taekwondo Coaches at the Friendship Hotel in Bakau.

The seminar, which kicked- off yesterday, will orientate 14 young Gambians in developing and adjusting their skills to modern taekwondo rules and regulations.

More specifically, in motional movement, a kind of imagination fighting, and instill in the participants the refereeing rules so as to improve The Gambia's standard in Taekwondo. This, it is hoped, will see The Gambia rub shoulders with big taekwondo nations.

During the course of training participants will have the chance to better themselves and help to train other Gambian's who are aspiring to take taekwondo as a career. The two-week seminar will also avail the participants of a basic knowledge of refereeing in order to avoid unnecessary skirmishes in any competition.

Furthermore, the World Taekwondo Federation has identified Mr. Aly Nour from to conduct the course and The Gambia Taekwondo Association has nominated 18 club coaches to attend the seminar.

In his opening remarks, Mr. Laurence Bruce, the deputy executive director of GNOC, expressed his satisfaction over the inclusion of female participants in the training package which makes the training more significant taking into account it will encourage other women into taekwondo.

Mr. Bruce urged the participants to make good use of the training in order to develop and improve their talent so that others can benefit from what they have learned in the training.

For his part, the course director, Mr. Aly Nour, shared some wishful remarks "in the next Olympics in I believe The Gambia will have some champions in taekwondo". Mr. Nour posited that the only way to achieve this is to have good coaches and referees. He expressed his readiness to beef The Gambia up to star status in the field of taekwondo.

The chairman of the National Sport Council expressed similar sentiments. 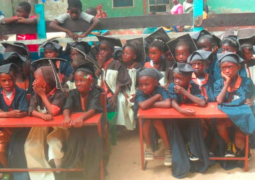