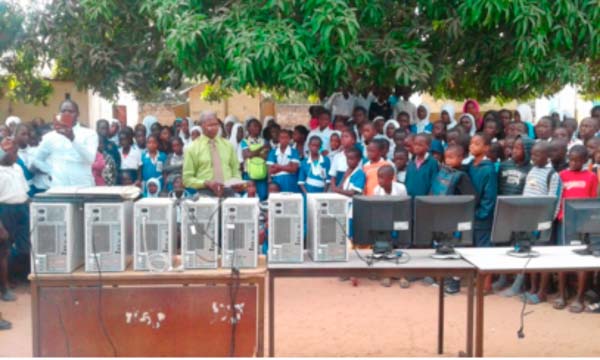 The computers were donated through the help of the Viktor Marx of Kulturskolan Raketeh, Bjorkhafen elementary School in Stockholm, Sweden.

The presentation was graced by the headmaster, schoolchildren and teachers.

Presenting the computers, a friend to Mr Janneh, Amadou Fandeh, said it is always good to be able to give back to one’s community.

He said Mr Janneh and many of them passed through the school, which made it essential and proper to give back to their alma mater.

He appealed for a proper handling of the computers and promised continued support to the school.

“The warm welcome shown here will serve as an encouragement for us to render more help to the school,” Mr Fandeh said.

The headmaster of the school, Mr Kebba Conteh, thanked the donors for the invaluable support, saying “the computers could not have come at a better time than now”.

They would go a long way in helping kids have access to computers individually during lessons, he added.

He thanked Mr Janneh, who he had been working “tirelessly to give back to his community”.  “This gesture is a clear manifestation,” he added.

Mr Lamin Daffeh, a computer teacher, in receiving the computers, said the computers would have good impact on the kids. “This will give more access in learning computing,” he said.

Technology is growing and it is important to be abreast with knowledge of it in this ever-growing world, he said, appealing for more philanthropists to follow the footsteps of Mr Janneh, whom he thanked “dearly for such a gesture”.