Principal Magistrate A.K. Ceesay of the Brikama Magistrates’ Court recently convicted and sentenced one Modou Kurubally to a fine of D800 in default to serve two months in prison.

Krubally admitted obtaining D525 from one Awa Conteh under the pretext of doubling it.

The facts of the case as presented by the police prosecutor, Sgt 1260 A. Colley, revealed that on 11 October 2010, the convicted person met one Awa Conteh at her residence to ask her about the residence of one Modou Jabbi.

He said Awa showed him the compound of Modou Jabbi, but instead the convicted person followed Awa and explained to her that he was a money-doubler.

Sgt 1260 Colley further narrated that to convince the complainant, the convicted person showed her white sheets of papers cut into sizes of D10 and D25 notes.

He said Modou Krubally then placed the D10 and D25 notes on top of the white papers and asked the complainant to put spray on them and keep them.

“The convict then asked Awa to give him D525 to double it, which she did,” he explained.

Sgt 1260 Colley added that Krubally also promised the complainant that he would do the job the following day, and showed her where he lived.

“The following day, the complainant sent her brother to go and check on the convict whether he was ready with the job and the brother met him packing his belongings to leave,” prosecutor Colley said.

Subsequently, Krubally was arrested and taken to the Brikama Police Station where he confessed committing the offence.

He said cautionary and voluntary statements were later obtained from him.

In his plea of mitigation, the convicted Krubally begged the court to temper justice with mercy on him. 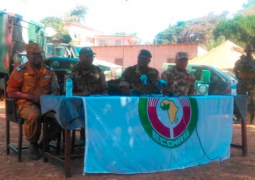