The training, which attracted participants from various sectors within nine countries, is organized by the African Competition Forum and the Gambia Competition Commission.

It is among others expected to provide a platform for mobilizing and harnessing experiences and ideas in competition regulation.

Speaking at the opening ceremony, Kebba Touray, minister of Trade, Industry and Regional Integration, said The Gambia like most African countries operates a liberal free market economy opened to both intra and international competition.

Noting that competition is one of the main drivers of economic growth, Touray said the need for a level playing field through vigorous competition law enforcement cannot be overemphasized.

He stated that in its drive to liberate its people from poverty through equal and fair opportunity in business and trade, the government under the leadership of President Jammeh established the Gambia Competition Commission in 2007, as a statutory body with responsibility to enforce the Competition Act of 2007.

The Act, he added, has as its primary objective to promote competition in business by curbing anticompetitive practices.

‘The Act also established a competition regime under which the Commission can investigate possible anticompetitive behavior by enterprises, and the Commission has powers to compel enterprises and any other person to furnish information it may require in conducting such investigations,’ he said.

According to him, in the event that the Commission finds any anticompetitive practices, it has powers to intervene and remedy the situation.

‘Where businesses have been found to be deliberately and negligently colluding to fix prices or share markets, the Commission may impose fines or other remedies,’ Touray noted.

The forum, he added, is necessary for improving our enforcement and management of competition law and policy so as to sustain gains from local, regional and international liberalized markets that are very pertinent to our initiatives for poverty eradication on the continent.

Previous:
As the campaign progresses
Next:
Turo Darboe donates ambulance to Sutusunjang village

A Boost for Telecom Industry 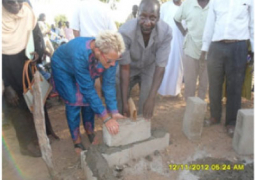