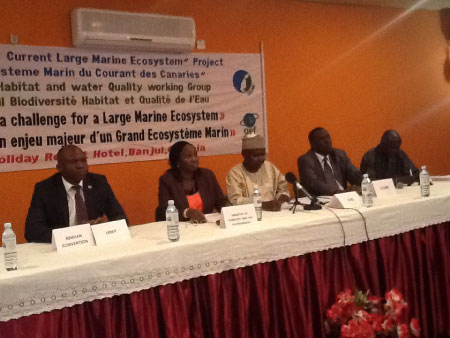 The project of Protection of the Canary Current Large Marine Ecosystem (CCLME) is from 12-14 March, 2013, holding a three-day meeting on the implementation of the second meeting of the working group of the project, at Baobab Holiday Resort, in Kololi.

The project, which covers Morocco, Mauritania, Senegal, Guinea Bissau, Guinea Conakry, Cape Verde and The Gambia, is co-financed by the Global Environment Facility (GEF) and the concerned countries. It is being implemented by the Food and Agricultural Development (FAO) and UNDP/ Abidjan convention.

The meeting, which focuses on the theme “Marine and Coastal Habitats of CCLME: a major challenge for a Large Marine Ecosystem,” has attracted various members of the working groups.

Declaring the meeting officially opened, Madam Fatou Ndey- Gaye, the Minister of the Environment, Parks and Wildlife, said the government of The Gambia has recognised the importance of the theme, saying it is in line with the country’s current sustainable development agenda.

“The importance of this theme therefore cannot be over-emphasised as the ocean covers 70 percent of the planet’s surface area and the marine and coastal environment contains diverse habitats and support an abundance of marine life.”

The CCLME project, she said, is unique in its strategic combination of fisheries and ecosystem governance frameworks, adding that biodiversity sector is a crucial area and key for the ministry.

“The CCLME project is based on sound science and technical expertise and will foster cooperation among project countries, as well as contribute towards monitoring of the status of the project,” she said.

In The Gambia and within the CCLME participating countries, she added, over-fishing and illegal fishing practices is established as the greatest single threat to marine wildlife and habitats.

She said her ministry is committed to working together in the CCLME project to address the degradation of the Canary Current Large Marine Ecosystem, caused by over-fishing, habitat modification and changes in water quality by adoption of an ecosystem approach.

For his part, Dr. Babagana Ahmadu, FAO’s representative thanked the government of The Gambia for hosting the meeting.

He expressed conviction that the work during the three days would be circulated in the process of setting up geo-referenced databases, which he said, will contribute to the development of a better management of the critical habitats.

He also thanked officials of CCLME for the ‘excellent’ manner in which they have been conducting the execution of the planned project activities for the benefit of the participating countries.

Speaking earlier, Mr. Abu Bamba, the Coordinator for Abidjan Convention Secretariat, said habitats of the ecosystem are very important in life. “We need to save them,” he said, citing mangroves as part of the ecosystem. 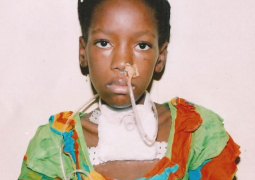