One Momodou Jallow of recently testified before Principal Magistrate Mahoney of the Brikama Magistrates' Court in the ongoing trial of Sulayman Bah, Bubacarr Bah and Bubacarr Sowe, who are charged with conspiracy and cattle theft.

They all denied the charges preferred against them. In his testimony, Momodou Jallow informed the court that he is a student and that on 6th April 2009, after lunch he was sitting in their compound with his mother, when he saw one of their goats running back to their compound.

He adduced that later they had a noise of the car at the gate of the compound. He said he and his mother then rushed to the compound gate where they saw a white vehicle, with a registration number KM 7793 going with the goat.

Mr. Jallow told the court that after taken the registration number of the vehicle, he and his mother went to the Old Yundum Police Station to report the matter. 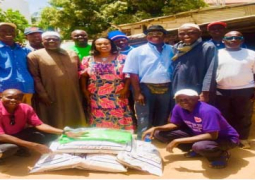