Catholics in Stella Maris Parish, which comprises Holy Family and Star of the Sea churches were seen crying bitterly as Fr. Pius Gidi CSSp bid them farewell. He said he was going for vacation but upon return would not come back to the Stella Maris Parish but to serve in another parish in the country. The parishioners who had shared with him and whose lives he had touched were in tears crying bitterly when the news reached them.

Fr. Pius Gidi CSSp belonging to the Spiritan Congregation of the West African Foundation (WAF) hails from . He studied in and was ordained priest in the Holy Ghost Order. These are Missionary priests that take the vows of Poverty, Chastity and Obedience to prepare them for the challenges ahead of them and to live more austere lives fort the sake of the Gospels. They live the values of the Gospels and have their pivot in the Mother of Jesus, Mary.

Father Pius Gidi, a young Ghanaian Missionary is open to the three vows, Spiritans are open to spontaneous transfers where the need is greatest.  This is under the vow of obedience. They also take the vows poverty and chastity. The vow of poverty enables them to live a poor life, owning nothing for themselves as the apostles did only for the sake of the . They believe in sharing to help the poor and needy. With the vow of Chastity, the Spiritans love as Christ did. They denounce marriage for the sake of the . Their love is unconditional; every body is the same for them.

With this at the back of your mind, Fr. Pius whose transfer came as a surprise to the Bakau Catholics and other friends outside the church burst into tears learning that he will not live with them again after his leave. In an interview with Aunty Rose Peters, this is what she had to say about this charismatic young priest, "Fr. Pius is a silent worker. He has worked a lot from 2006 to date. He is committed to his duties and has little time for himself. The truth is, at the beginning we did not understand he would be such a nice priest. The poor the aged and the sick he made his friends. The rich he did not send away empty but uplifted them to the best of his ability. I am in tears, who would now be close to my husband and others as he was?"

According to Theresa A. Kanjia, Fr. Pius is a little giant capable of doing his best to let others live. "Our parish was virtually not in order, it was virtually those who have cars that read in the church before he came, there was no youth group, there was no prayer meeting and the Parish Feast we had in the past, he came and added more meaning to it. The sick of the parish, the old and the young he considers a lot. When there is strife he makes sure it is settled. He became the listener to everyone's problem. My family will miss him. I wish he would have stayed much longer before going on transfer."

At his presbytery, parishioners came in their numbers the evening before his departure to pay homage to him and to show how much he touched their lives. Many brought cards of appreciation and other gifts to show how much they appreciated their priest. There was no place to sit when parishioner after parishioner thronged in to see Fr. Pius CSSp. Every one was moved with emotion as many confessed that such has never been the tears that fell in their parish when a priest leaves. Men had red eyes and women's tears fell profusely in the middle of farewell speeches. Among the spectacular things at parishioners meeting him was when a little girl who had just received her First Communion, called Mary Hannah Kanjia went and asked Fr. Pius if her confession could be heard as he is going away. Fr. Pius heard the girl's confession and joined the people again. Church groups including CWA, Youth group, Choir, Lectors and others wee present. Their main message was, "We would have loved the Bishop to revert his decision to let our priest stay with us a bit longer." Fr. Pius thanked all for their support and cooperation for the few years he worked with them. "I love you and I will pray for you." Glen Bangura whose heart operation Fr. Pius spearheaded and made several pleas for help, now recuperating at home from UK, could not go to see his friend, was in tears at home. "I wish he was not moved for now but I hope he will come to work here again," he said. 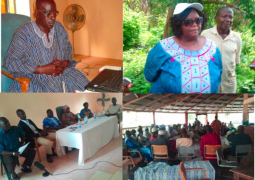