A two-day Golf competition sponsored by Standard Chartered has recently ended at the Fajara Golf Course on Saturday 19th June 2010.

The competition brought together over 35 Professional and Amateur Golf players.

Fakebba Drammeh, alias Tiger Woods came out first position in the Professional Golfers category after completing a total round of eighteen holes with a gross score of 67, 2 under par.

Gibbou Jallow took second position with a gross score of 74, 5 over par in a total round of eighteen holes.

Bakary Touray, alias Bax and Tijan Kuyateh occupied third position with a gross score of 76, 7 over par each in a total round of eighteen holes.

In the Amateurs category, Buba Jatta was named the overall winner of the competition after completing a total round of eighteen holes with a net score of 41.

In the 18-28 category, Alan Maccray came out first while Ebrima Jawara, the President of the Gambia Golf Association (GGA) took second with a net score of 35.

All the winners of the various categories were awarded with prizes at the end of the competition.

Bai Mass Saine, the Head of Wholesale Banking at Standard Chartered, expressed delight at the level of the competition, adding that the idea was to have a fun.

He said that the tournament was staged to meet their clients from various works of life.

Saine went on to say that Standard Chartered is not only out to make profit, but to also satisfy and give back to their clients and community.

Alan Collins, the Chairman of Fajara Club, said they were very happy that Standard Chartered has given them the opportunity by sponsoring a tournament for both the Professional and Amateur.

According to him, their goal is to promote Golf among the youths of The Gambia.

He further stated that Fakebba Drammeh is more than capable of winning International Golf Competitions, and that they were pleased to have him as a Professional Golfer. 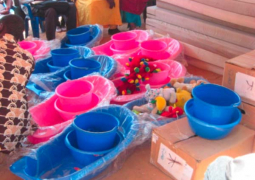