The primary objective of the GEAPP was to enhance productivity and domestic food production in short and medium-term in order to increase rural income and ensure food security.

According to officials, the GEAPP, which will be implemented by the Project Coordination Unit (PCU) of the Gambia Africa Emergency Locust Project (GM-AELP) under the Ministry of Agriculture, would provide incremental funds to the (PCU), strengthen the capacity of the PCU, to adequately monitor activities and support field staff and partners in implementing the project through the provision of fuel and office supply, among others.

Speaking at the validation forum, the Project Coordinator of GEAPP Sheikh Tijan Sosseh explained that the European Commission, through the World Bank’s international development association provided government grant of Euro 5.3 million towards the implementation of the project.  He noted that the GEAPP grant aimed at improving access to agricultural input and equipment for targeted farmers within ten most vulnerable districts.

Noting that the project will be implemented during a period of eighteen (18) months, as approved on 5th January 2010, he said, it is intended to increase cereal (millet and rice) production in the ten districts identified as the most vulnerable.

He revealed that the estimated population of these ten districts is 238,000, and that about 20,000 farmer groups will benefit from the project.

According to the Project Coordinator, the project has three components, namely provision of agricultural inputs and equipment, rehabilitation of post harvest and seed multiplication.

Noting that the specified Environment and Social Management Framework (ESMF) objective is to establish clear procedure and methodologies for environmental and social planning review, approval and implementation of sub-project to be financed under the project, he said, the specified objectives are to determine the training, capacity building and technical assistance needed to successfully implement the provision of the ESMF.

In response to food crisis and soaring prices affecting the country, he said The Gambia government in addition to taking mitigating measures, had sought the assistance of the international donor community. This, he said, was aimed at enhancing agricultural productivity and domestic food crop production by proving direct support to farmers through the provision of agricultural inputs and equipment.

He added that following an inter-agency assessment mission in August 2008 comprising FAO, World Bank, World Food Programme and the International Fund for Agricultural Development (IFAD), the Gambia Emergency Agricultural Production Project, was developed in 2009, based on the assortment findings.

Also, speaking at the forum was the Director General of Department of Agriculture (DOA), Dr. Sait Drammeh, who expressed delight at representing the Department State for Agriculture.

He then urged the stakeholders to critically look into the document in order to make necessary adjustments.

In declaring the validation open, the Deputy Permanent Secretary at the Ministry of Agriculture, Abdoulie Danso underscored the importance of reviewing the document, noting that without it, the project cannot be effectively implemented. 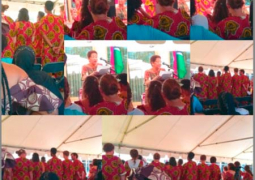