Bishop Robert Ellison CSSp aware of the limitations of the Catholic Development Office (CaDO) one time called CARITAS, brought in a Development expert from to strengthen their efforts and to make CaDO and enviable institution worthy of emulation and a power house for development. The institution under the leadership of John Z. Sylva made available all mechanisms in its reach to Edward Johnbull from Caritas Sierra Leone. The level of sincerity enabled the expert find away out for institution.

In Bishop Ellison's address, he said, quoting the Holy Bible, "If one of your brother or sister is hungry and says to you I am hungry and you say to them go home and I wish you well. This will teach us the real essence of the word. That message must always be accompanied by the signs, if you wish others warmth and plenty food and are doing nothing, is no credibility."

He further reiterated that they talk about the development of the whole of human person, "the spiritual, physical and the mental."  The Bishop recounted that two years ago they had their Diocesan Assembly where they became self-reliant.

"We are a Church with an agenda. All religious houses are represented here. We believe in the formation of the whole person, physical, mental and spiritual," he said. He urged all participants to ask questions and enjoy the day.

Edward Johnbull an authority in the art of Management working at Caritas in and also working also as a consultant spent two weeks in evaluation through questioning of all projects initiated and operated by CaDO in the Diocese of Banjul under the Bishop.

Johnbull firstly gave an overview of CaDO citing its turbulent history into transition from CARITAS to Catholic Development Office (CaDO).  He said that he'd visited all CaDO projects, did interviews and ended up with a workshop for Catholic stakeholders present. He said the first problem he found out about CaDO is that they lack funds. "The institution has struggled a lot, therefore the Bishop decided to restructure the whole thing by setting up a Board. A new director would be appointed and CaDO would now have a new face to join the wider world. Fr. Edu Gomez, the Cathedral Administrator then asked if what was done in the past was meaningless?

"It is good to build on what is already there. Caritas did a lot but it was dissolved. CaDO came and did an awful lot. The organisational structure is going to be strengthened, what they lack and what needs to be developed and to acknowledge what has been done so far," Johnbull answered.

Talking on the agenda for development, Edward Johnbull stressed on cordination and standardisation of CaDO. He mentioned the need approach, programme approach otherwise known as the problematic approach. Johnbull, the consultant said scattering projects all over the country is not good, those days are gone. "Have a focal strategy. If programmes are integrated it becomes better. All would be channelled through CaDO," he said.

He asked: "What does CaDO see as priority? For CaDO to grow it has to think well. You have your hardware but no software. Projects don't grow you multiply them but programmes grow."

According to Mr. Johnbull, CaDO did not have a proper governing structure and did not have a serious Board. He mentioned a lot of problems concerned with the board during the 2001 to 2007 period.

"There was no fixed appointment, no code for the Board members so they were dysfunctional. Two people were added bringing their number to five. They need to look at their criteria and also code of conduct. Board must work towards working together," he said.

In his proposals Johnbull posited that for CaDO to be more effective, the Board must have a part time Board Officer, working two days a week and cordinating the affairs of the Board. He suggested setting up of finance and human resource committees.

Talking about the governing structure, he dilated on the meaning of governance. He said the core business of a good governance board is strategic management not operation is management. "It means authority versus responsibility non-strategic governance is a recipe for death. (It is reactive and defensive)."

CaDO's management structures, Johnbull said, "mostly the finance is often very good friend to the director in most instances." He said that he is of the view that some key members in CaDO are being sidelined. Operations budget he suggested should be kept away from project budget.

"The current staff should be trained or to get new ones with skills that befits the smooth running of CaDo. If you make it only pro-parish then there are donors who would want to help communities then they would stop. People or donors would find it difficult to solicit for fund on behalf of t he parish," he said.

He suggested having trained personnel on project writing, project management and bring them together and train them, noting that it will strengthen them to go out and do the right things.

He further advised to also have a full time Project Officer who would work together by getting in touch with the others far away. He also talked on accountability.

Mr. Johnbull added that people should not avoid responsibility but take the bull by the horn. He told a story on the appropriateness of projects to communities, that people should be careful in choosing these projects. He said they should also employ a Deputy Programme Manager and a Grant Manager. "They also need a Programme Head, Grant Writer etc. The Church should provide asset for CaDO," he said.

After a series of question and answer, Bishop gave the closing remarks and said the workshop would give them a road map and it will reconnect them with Caritas International.

"Edward has made a clear road map. We need to identity a project writer. We had had a project writing course here for forty-five people here recently and it was good. The late Pope John Paul said the money we use from the foundation should be meant for all not only ourselves," he said. He saw the need for DELTA training session as in the past to be reintroduced. "It is the most practical way o f training people," he said. 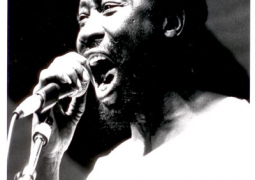