The country is no doubt blessed with some great tennis stars in both the male and female categories whose wonderful contributions in the development and promotion of tennis has been the key to the successes registered by the Gambia Lawn Tennis Association, both locally and internationally despite all the constraints.

This lady who is just 13-years-old has already established herself as one of the finest female tennis stars the country can be proud of due to her dominance in most of the Junior tennis tournaments, as well as other championships at even the senior category.

Born in Bakau New Town in 1997 to a Gambian mother, Isatou Drammeh, Fatou Sawo who attended and before moving to her current school, , said she fell in love with tennis in 2004, thanks to the motivation of her friends.

"My involvement in this beautiful game came at a time when I visited the Independence Stadium's tennis courts in Bakau four years ago, where I found a lot of people including my friends playing tennis and I wasted no time in expressing my interest to join them after learning that it was free of charge," Sawo who represented the Gambia Lawn Tennis Association in a series of international tennis championships told Pointsport.

The youngster was a two time finalists of the Gambia Lawn Tennis organised Junior tournaments, such as the one held in 2007, as well as in 2008, but could not secure the championship title after being beaten in both finals by undeniably one of The Gambia's greatest young tennis player, Lalla Sallah.

Sawo became a runner-up in The Gambia open tennis championship after putting in a respectable performance, which saw her progressing to the final stage at the expense of some big name stars last year.

Fatou had his first taste of international tennis championship when she successfully represented The Gambia in a highly-rated tennis tournament in Kaburus, Cassamance five-years ago with some fantastic achievements to be optimistic about having reached the semi-final of the girls 12 and under tennis tournament.

In 2006, Sawo along with tennis association trio Buba Drammeh AKA (Bobban), Lalla Sallah and Yankuba Drammeh, including the coach Badou Koli were part of the contingent that had undergone a high-profile tennis championship in , as part of the Independence Celebration of that country after they returned home with a medal.

Sawo, who has never denied her desire to excel to the highest tennis standards in the very near future also made The Gambia proud by breaking her way into the quarter-final of the Junior Tennis Tournament for West and Central Africa held in , despite her failed attempt to progress to the semis.

The 13-year-old went ahead to record a remarkable performance by finishing the runner-up in the recently concluded Junior Tennis Tournament at the Independence Stadium In Bakau. 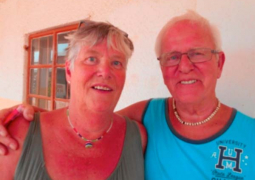