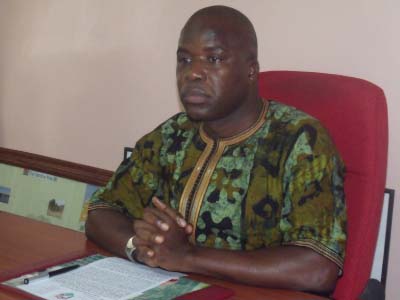 Hon. Sheriff Gomez, Minister of Youth and Sports, yesterday donated a brand new Player Change Display and five footballs to the Gambia Football Association (GFA) at a presentation ceremony held at the Ministry’s headquarters in Banjul.

Speaking at the ceremony, Hon. Gomez said it was a great moment and privilege for him to donate such to the GFA in enhancing football in the country and most especially when the Gambia senior national team is preparing to face Burkina Faso in the final game of the AFCON qualifiers at the Independence Stadium in Bakau on Saturday.

This would enhance the quality of the game he said, adding that there is nowhere in the world now that people are using wooden boards to chance players in international games.

He also described the donation as timely, noting that it will serve as a motivational factor for Saturday’s game and that The Gambia is small but big in heart.

“I have always been reminded that The Gambia should move away from using wooden boards and I took the opportunity to call some people and yesterday (Wednesday) I was sent this board and the other gifts I had,” he said.

“It is all about giving motivation and encouragement, particularly when the Gambia is about to take on Burkina Faso,” he said while calling on everybody to come out on Saturday to support the players.

He added: “This is our last game of the qualifiers and we should make sure we all go out there and make the boys know that the whole country is behind them to make them proud and happy so that they can deliver.

“This is a historic moment but  I am also just doing my part as the Minister of Youth and Sports,” he stated, adding that he is not sure whether the cost of the player change display is okay but that everybody who knows  him knows that if he wants to buy something he will buy the very best.

“I hope that the GFA will make great use of it and to also make sure it has the longevity it should have,” he said, adding that it would be very well.

“The two conditions are, they should use the player change display in international games but it also enables the Gambia For Gold and its partners to use the board to tell people who their partners are,” he noted, adding that the game against Burkina Faso is a national pride.

“We Gambian people are proud people with one purpose and one direction under the leadership of the President of the Republic of The Gambia,” Hon. Gomez said.

“We have seen the encouragement he has done in sports and that is why we must always come together to do our best to give everything we have to the boys.”

Gomez concluded with the following statement: “The boys are committed and the spirit is there and I think the entire country will come at the Independence Stadium on Saturday to support the players and I have no doubt that we can win the game.”

Seedy Kinteh, President of the GFA, described the day as a great one in the history of Gambia football, noting that this was his first time a minister was donating such a significant gesture to the GFA.

He also stated that, they will make good use of the board and the footballs donated to them, adding that they were deeply impressed with the gesture.

On behalf of the GFA, football fans and the Scorpions, Kinteh thanked the donor while assuring them that the team is going all out for a win against Burkina Faso on Saturday and that they are not taking the game lightly.

Other speakers on the occasion included Mamudou Max Jallow, Executive Secretary at the National Sports Council, Malang Jassey, Director of the Ministry of Youth and Sports and Kumba Konateh, who chaired the occasion.