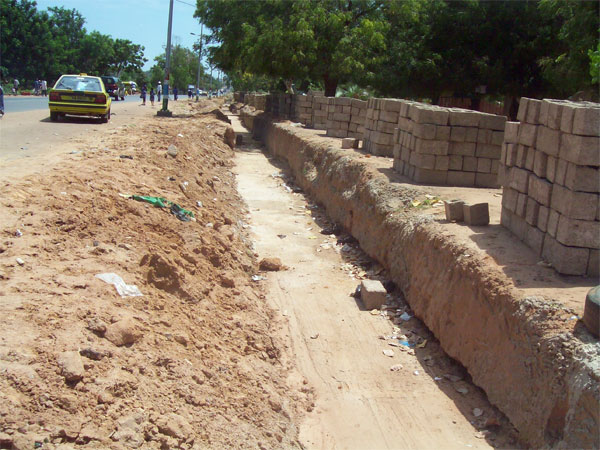 Behind houses, street corners, football pitches, in front of houses and more, are faced with poor drainage system problems that keep hampering the free movement of people and goods especially when it starts to rain. The worst comes when the rains are heavy and they soak well into the walls of houses some of which are made of low quality cement or mud bricks due to excessive poverty. Augustine Kanjia takes a look around to see how this phenomenon has brought set back and its potential to cause disaster if not amended in time.

We need to reflect on the disaster areas of the Kombos, which includes , Bundung, Bakau, Manjai, Tipper Garage, London Corner and areas you can name especially Sanchaba after Bakoteh. We know that some of these areas are on the hill and need to be cared for by providing good drainage systems but this should be done by concerted effort to enable the environment be free for all to dwell without fear of disaster.

Contributing Factors to poor drainage varies as the little tiny ones available are blocked by the rubbish thrown behind houses on the pretext that it is not a large amount, it would not cause anything. But the accumulation of such rubbish has caused total blockage and caused flooding and damages to houses and people, putting people's lives at stake. The most baffling ideology of all is that the affected people keep throwing rubbish in odd areas which accumulate and gather sand that covers it with vengeance. When it rains it is clearly visible that the blockage caused the rubbish compounded by the sand over flows into houses or sucks into houses as in the case of , causing emergency assistance for those areas.

The unhealthy situation comes every year but people have not learnt to control some of these happenings, they instead keep on doing the same old thing. "The world cannot be made better if the people themselves do not do their best to make it what they want it to be," said Pricilia Rogers. One thing is sure that is, for people to live in a clean environment, they should have to put an effort into their own cleanliness. Like a child, he may take care of himself but an elderly person does it better for that child than him or herself.

What would the drainage of the society be like if the elders, whom we call in this instance the government, be like if they play their part as they have started on the Coastal Road starting from the Traffic Light from the right. That area would be danger free especially of flood. Government should have to challenge themselves to take the drainage system as a challenge to get it done little by little each time they have the means. Some may say government alone cannot do it, may be philanthropists, house owners, KMC and others.

The ideal time many say good for the drainage repairs is immediately after the rains. The reconstruction would take time but it would certainly go a long way. Doing it in bits but surely would be a good symbol of another facet of the development drive.

The Ebo Town Field becomes a river just after a down pour of rain. The place is in a slope, which allows for water to empty itself there. And because of the lack of a proper drainage, it is seen overflowing with water and rubbish and no one is allowed to go through because of the intensity it comes with. Cars make it worst as they keep digging the porous soil allowing water to permeate leaving the roads inaccessible and in very sour positions and many a time leaving the tarmac warn out with pot holes. Each year one hears of the rain's havoc on the inhabitants of . Red Cross and Fire Fighters have battled there including the Disaster Management Team only to help the people of the area. Others believe that the drainage system should be planned from

Brikama High Way
down to since that where water gets to for settlement. But in these areas there is no proper drainage system that would help the run off water goes in a respectful way. The one at Church Hill's Town Shell Petrol Station, newly constructed has given a face lift to that area and the water around there is going to be at peace with the inhabitants of that area. Drainage management in that area is enhancing happiness to those that live there and to those that pass by. When it was not properly made, one could see the inconvenience it caused to the lot and how people and cars hated the road. The people feared rain fall due to the measured settled water in ponds that were seen, causing hindrance to those who used the road. That area could serve as an example to improve the society's lot.

Sukuta is on a slope; you would agree with me, it therefore needs a controlled drainage system to help the situation of flooding down at Tipper Garage as it has always happened. Inhabitants in that area are now in trouble and are wishing that the rains be silent while farmers pray for abundance of it to sustain their crops for more yields. With this contrast, one sure way would be to dig a very big drainage system to server a bigger community that would empty into the natural water way at the . This could give rise to the formation of a stream that would flow in the middle of a city. It is evident in the raining season.

Abou Jammeh, a contractor says, "We do not only need a drainage system but people have to make sure they control their rubbish. The road is bad on our side and with rain it becomes sour to the eyes and legs too. May be to help the effort of government, KMC, the citizens of Sukuta and the government would decide to come together and find a common way of making the drainage system viable. We the citizens may provide the man power, government provides the expertise and part of the money and KMC provide, money, manpower and expertise it is only then we shall find a lasting solution to the problem at hand. Many houses have broken down at the Tipper Garage as the rain water flows downwards with vigour, but what can we do? It is part of nature we only need to correct it from happening. We should help to add beauty to nature. He said.

The serious areas have been left behind because only the poor who stay in those areas are affected and no one seems to see them. Let us take Jola Kunda for example; going further down towards Sukuta, one finds out that the water from that end empties down there and that one from Bundung empties at the same position. If drainages were created then there would have been very little gulley erosion as seen in many areas.

Having big houses, big cars and sleeping in a pool of dirty water around your house or your car getting stock in a pool of muddy and milky looking water would not show development, a turn around of such situation coupled with a few other things are surely a developmental sign.

The ball is in the court of those who plan, those who do the implementation to see the reality of how many people suffer during the rains which could have been averted as the road constructions are done. The road constructors are to construct drainages that would fit the roads they make, thus a disfigured edge on roads due to erosion. They could be part of the development of the drainage and road systems.

A lady preferring anonymity at says, "We may not survive this year's rains because last year the poor drainage system made our water unsafe from the wells unsafe and they had to help us. We voted for President Jammeh, they should help us get rid of this poor drainage system. I may not be using my shoes as the rains have started. Sometimes we are caught in our houses as it keeps raining and we can't go out for two days." Others complained that their children walk through the muddy waters and they return home wet in mud like babies from the grave. "We need help to keep our babies healthy as diarrhea is always eminent during flooding periods in our area. I take my cakes on my head to go and sell, I battle with the big bowl on my head and I battle with the dirty water to let me just get my children's survival. Someone would have to know that we are all made equal but our status during the rains make us feel inferior, and should not be so since we are made in the image and likeness of God." She said.