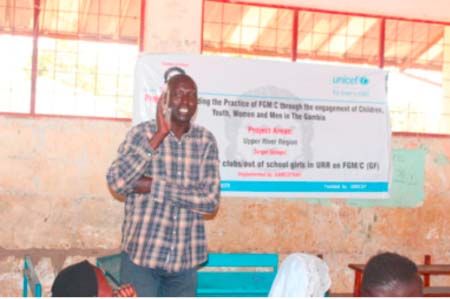 During a presentation on child rights and protection at a GAMCOTRAP organized sensitisation at Missira- Ba Mariama in Upper River Region (URR) Kantora District,

Social welfare coordinator of the Central River Region (CRR) said child protection is a collective responsibility of everyone.

“Everyone is responsible to make sure that children are protected from all forms of abuse, neglect, exploitation including discrimination and to ensure their wellbeing in the society,” Ebrima Jassey said.

He said it is mandatory for every person to protect children who are about to be involved in risk to ensure their safety.

The social welfare officer further said child labour is affecting the wellbeing of children in the society, noting that the practice is prohibited in The Gambia. He warned people to stop such practices in the society so that the child’s interests can be attained.

According to the International Labour Organization (ILO), the minimum age for light work is 16 years. The light work has no negative bearing on children’s education, health and physical wellbeing. “16 years old children should not work in hazardous places such as chemical producing factories and labor-intensive work places.”

Mr. Jassey said research has shown that Central River and Upper River Regions are vulnerable regions to child marriage and teenage pregnancy, adding that many often dropout their children from school just to contract their marriage.

He noted that both international treaties and national laws such as the Children Amendment Act 2016 have proscribed all forms of child marriages in The Gambia.

“No person has the rights to contract children for any forms of marriage and if anyone is culpable of such will face legal consequences,” he reiterated.