Lawyer Sheriff Tambedou, a senior legal practisioner was unanimously elected as the new President of the Gambia Bar, at the just-concluded Gambia Bar Week held at the Kairaba Beach Hotel, where members convened an extraordinary Annual General Meeting.

A press release from the Gambia Bar Association, signed by the Secretary-General announced that the "GBA is hereby informing the general public that a new executive of the Association was elected at its Annual General Meeting held at the Kairaba Beach Hotel on Friday, 29th January."

According to the release, the following members were elected into the executive:

In a short interview with The Point, the new GBA President described the task ahead of him as challenging. "The task ahead of me is not easy, but I will try my level best to continue from where my predecessor, Amie Bensuoda, stopped," he said.

He expressed the hope to live up to expectations with his entire executive members, while calling for more cooperation and support within and outside the bar.

He finally commended the outgoing executive for what he described as "a job well-done." 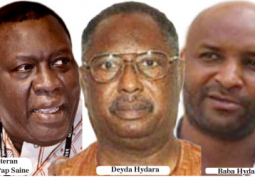