The ongoing Basketball tournament organised by Serrekunda West Sport Organisation continues to gain momentum among the participating basketball clubs, which is currently in session at the Serrekunda West Mini-stadium.

A well-contested basketball match, which promises to produce some spectacular performances among the participating teams kicked-off on Wednesday 20th January.

The opening match was a clear testimony to the excitement the tournament has so far produced.

This was followed by another wonderful basketball match between Wallidan and Serrekunda East, which ended 33 points to 21 in favour of Wallidan, while conceded an unconvincing 54 points to 24 defeats to Sports House as part of the final match in Week One fixtures.

Meanwhile, matches in the tournament continue later today when Serrekunda East face Kanifing South will be aiming to register their first win of the campaign.

Thursday's match between Wallidan and YMCA who both registered victories in their opening matches is expected to witness another titanic basketball encounter when the two sides meet on Thursday.

The last match of Week Two will be played between Sports House and Kanifing South, at the Serrekunda West Mini-mini-stadium on Friday. 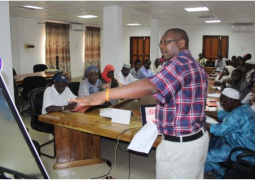