Organisers of the Sanneh Mentereng Fitness Football Tournament have embarked on raising funds for Brikama United’s participation in the 2017 CAF Confederation Cup Competition.

The organizing committee has therefore conducted a draw for the tournament, whose fixtures have been released.

The six villages are divided into two groups of three villages each and the groupings for the championship are as follows:

Group A comprises the host Brikama, Gunjur and Brufut, while group B consists of Lamin, Sukuta and Sanyang.

The host Brikama will welcome Gunjur in the opening game on Saturday 16 July 2016, at the Brikama Box Bar Mini Stadium.

On Thursday 21 July 2016, Sukuta will play against Sanyang.

All matches will kick off at 5pm.

Brikama United are expected to represent The Gambia in the 2017 CAF Confederation Cup after winning the FF Cup title on 5 June 2016, after beating rivals Bombada 1-0 in the final game played at the Independence Stadium in Bakau courtesy of striker Sainey Bojang aka Powerful.

The year 2017 will be the second appearance of Brikama United in the CAF football club competition following their participation in the champions league in 2012, but were eliminated by the then African champions Esperance of Tunisia in the second round 4-2 on aggregate after eliminating Senegalese side US Ouakam on penalties, following a 1-1 aggregate draw in both legs in the first round. 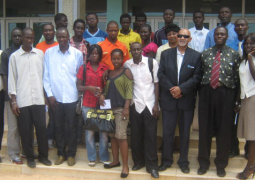