The Academy boys were demoted to the second tier last season following their dismal performance in the country’s top flight league.

Samger under the guidance of new gaffer Sulayman Kuyateh will use the upcoming months to prepare his team fit for life in the second division league.

Kuyateh, who signed a two-year contact with the academy boys, will do all efforts to promote the team to the first division following their relegation to the second division league last season after woeful display in the premier tier.

Scorpions prepare for March 26 encounter with Gambia in AFCON qualifiers 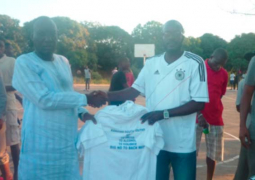