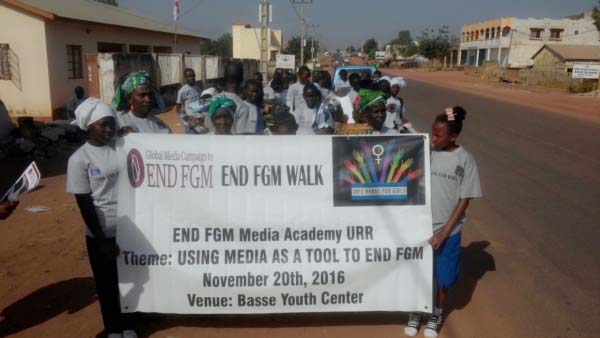 The walk, organised by Safe Hands for Girls with funding from the Guardian Global Media Campaign, was held from Basse Red Cross branch to the youth centre where statements were delivered.

The event brought together more than 200 participants including students, teachers, youth groups, traditional and cultural groups, and the media among a host of others.

Mamadou A.H Bah, team leader of the URR End FGM Media Academy, said the struggle to totally put an end to the practice of FGM started decades ago and it still continues.

He said The Gambia government has banned FGM in December 2015 and the National Assembly, in the same year, passed a bill into law to put an end to criminalise the practice.

A fine D50,000 or an imprisonment of three years or both fine and imprisonment awaits anyone found guilty of breaking the law, Mr Bah said.

Similarly, he added, a fine of D10,000 awaits anyone who keeps silent over an FGM-related issue that is known to the person.

Detective sergeant Lamin Kebbeh of the Gambia Police Force who is the officer for gender and child welfare unit at Basse police station, said the government has ratified international and regional legal instruments that protect women and girls from all forms of discriminations and violence.

These include the Convention on the Rights of the Child, the African Chapter on the Rights and Welfare of Children, among others.

Detective Kebbeh pointed out that the 1997 Constitution of The Gambia has it that marriage should take place between men and women of full age and capacity and base on the full consent of the parties.

He said child sexual abuse as well as force and early marriage are human rights violation.

Alhagie Jawara, secretary to the technical advisory committee of URR, said FGM “is a very wicked practice” as it involves the cutting of the clitoris which is the most sensitive part of the female genital.

“This is why the government of The Gambia is working tirelessly to make sure that the practice of FGM is totally eradicated in the country,” he said, adding that the general public, especially parents, should help in the fight to stop FGM in the country.

Kadijatou Jabbie, vice chairperson of the Regional Youth Committee in URR, said: “The practice of FGM is a cultural belief and not a religious obligation.”

“It is not stated anywhere in the holy Quran that people who do not practice FGM are not complete Muslims,” she added.

Mama Drammeh, an ex-cutter who inherited the knife from the mother, said the intensified anti-FGM campaign is “timely and efficient” because it is during the cold season that young girls are taken to the ‘Ngansingba’ (cutter) for cutting.

She further urged all parents to desist from the act of FGM so they would not fall foul of the law.

The anti-FGM walk was punctuated by dramas by traditional communicators and St Georges Technical Junior and Senior Secondary School all of whom performed on how culture cannot be compared to one’s health and the law. 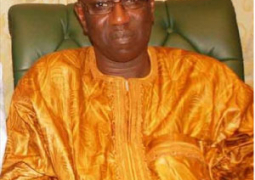