The long awaited and much talked about Roots Festival is finally underway. The event was officially launched over the weekend by President Jammeh at a ceremony held in July 22nd Square in . The theme for this year's edition of the bi-annual festival is "Celebrating Unity Through Culture". The events of the festival are designed to enlighten people culturally and expose them to the culture and hospitality of The Gambia. Speaking at the ceremony, President Jammeh said the Roots Festival is an occasion to reflect on the past and envision a new future. He stressed that the event is not just to attract investors and tourists to The Gambia but to remind Africans that they will no longer be ill treated. He said that despite being a small country The Gambia will never be enslaved or colonised by anyone no matter what.

Speaking earlier, Mr. Momodou C. Joof, Chairman of the National Coordinating Committee, said that The Gambia has been hosting the Roots Festival since 1996 and despite being a small country it is a cultural champion.

In her statement, the secretary of State for Tourism and Culture, Hon. Nancy Seedy Njie said that the event was founded in 1996, initially as an annual event, to build bridges between The Gambia and the Diaspora and promote cultural tourism.

The carnival will continue in various parts of the country before concluding in Kanilai where there will be a pan-African symposium. Guests will enjoy traditional African wrestling and also witness ritual ceremonies. 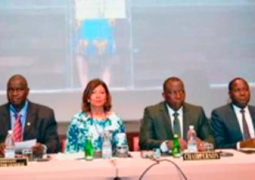