The accused persons allegedly in May 2009, at the NIA head office in , conspired among themselves to cause injury to the persons of Lamin Kabou and Lamin Sima.

It was further alleged that they had the intent to do grievous harm, and unlawfully wounded Lamin Kabou by beating him with fist blows, an electric cable and metals.

Kabou in his testimony told the court that he resides in Brikama, and works as a narcotics officer, adding that he knew all the accused persons by their names.

“On 31st May 2009, I received a phone called from one Babu Cham, that he suspected that there was drug dealing going on at the Kembujang-Brikama high in West Coast Region,” he said.

After receiving the information, he added, he called his senior, Lamin Sima, and they went to Babu Cham, who narrated all the story to them. Then Lamin Sima called one Dambel at the Brikama Police Station, an NDEA officer, to inform him about the scene.

“On our way to Kembujang-Brikama highway, we saw people running in the garden and we also followed them, where we found Tijan Ndure and Karamo Bojang put in handcuffs by one Omar Jammeh, who was escorting them,” Kabou told the court.

“We asked Omar Jammeh, who he was, and Jammeh told us that they are from the NIA. We also introduced ourselves to him as narcotics officers, and demanded to look into the plastic nylon bags, which he was holding at the time of escorting the two people,” the witness continued.

Still testifying, Kabou told the court that after introducing themselves to Omar Jammeh, there was a push and pull, and Omar Jammeh told Lamin Sima, “fuck you, this is not an NDEA show, but NIA”, and then he hit Lamin Sima on the chest.

It was then, PW2 added, that the 1st accused opened fire, saying that “anybody who moves from where he was, he will fire you”.

“We later moved to a waiting van, and met one Sanna Bojang, who said he was the one who made a deal with the NIA,” he added.

“We later drove their car to the Brikama Police Station together with Tijan Ndure and Karamo Bojang,” the witness went on.

“At the Brikama Police Station, we found Tijan and Karamo placed in cell, and we met one Abdoulie Sanneh, who also told me that he used to make a deal with the NIA officers, but this time around, they betrayed him,” Kabou further narrated.

PW2 also told the court that, at the Brikama Police Station, they still demanded to look into the said plastic bags, but the officer commanding, Omar Jammeh, insisted that they will not look into the nylon bags.

He pointed out that OC Omar Jammeh left with the nylon bags together with Tijan and Karamo to the NIA headquarters in , where they placed them in a cell.

“On 3rd June 2009, the former Chief Executive Director of NDEA, Bun Sanneh, called me to explain what transpired between me and the accused persons. I explained every thing to him, and he also told me that the then Director General of NIA, Bo Badjie, wanted to see me.”

“I went to NIA together with the former NDEA boss, and we met the Director General at the reception, and he told Bun Sanneh, “Uncle, am very sorry for what happened.”

“After the 3rd accused person came, they gave me a piece of paper to write all what I know about the scene, which I did,” PW2 revealed.

Still testifying, PW2 told the court that the 2nd accused looked at the paper, and asked him to add to his statement that the suspects they caught at Kembujang-Brikama highway were drug dealers, and that he said, “No”.

“The 2nd accused called the 3rd accused, who came from behind and gripped me. They put me in handcuffs and the 3rd accused person pulled out scissors, tore my clothes, left me naked and they started beating me with electric cables. It was from there that I started running from the NIA to the NDEA main office in ,” Kabou further revealed.

He added: “When I arrived at the NDEA main office, the former NDEA boss called Bo Badjie on the phone, and some minutes later, the accused persons forced their way to Bun’s office and we went back to the NIA office to meet Bo Badjie, the then Director General of NIA.”

He said when he arrived at the NIA main office, the two Directors went inside the office, and the accused persons followed them inside, adding that, some minutes later, they came out and said, “Lamin Kabou, who ran away is here again”.

“They again started beating me, until Bo Badjie shouted at them to stop the beating, and Bun then left for his office, and left us at the NIA,” he told the court.

“On that particular evening, the former IGP came to the NIA main office, and asked for the accused persons, since Bun Sanneh complained to him that some of his personnel had been tortured by the accused persons, and he was there in the event the Minister of the Interior asked him, he can know what to say,” he added.

The accused persons, he added, responded that they did not know him, and he was taken back to the cell where he was detained for 28 days, without being taken to the hospital for treatment.

He said that the accused persons had not taken any fingerprints of them nor taken them for weighing, adding that when he gained his freedom, he took photos of his wounds for reference.

The photos containing the wounds were later tendered in court as exhibits.

The case was at that juncture adjourned to 11th January 2010 for cross-examination. 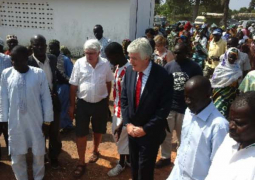