[if gte mso 9]> The report of the National Assembly select committee on agriculture, rural development and NGO affairs, following a nationwide tour on agricultural projects/mixed farming centers, was Monday tabled before deputies for discussion.

Tabling the report on agricultural projects/mixed farming before fellow deputies, Hon. Bintanding Jarju, chairperson of the National Assembly select committee on agriculture, rural development and NGO affairs, said the committee acted under the provisions of section 109, subsection (2) of the 1997 constitution, which mandated it to investigate or inquire into the activities or administration of ministries or departments of the government.

She said such investigations or inquires might culminate into proposals for legislation.

Hon. Jarju informed deputies that members were critical of the enormous costs attached to the importation of rice and other food items each year.

“Government foresees this situation as not sustainable, thus the executive came up with the Vision 2016 policy to diversify agriculture,” she added.

This policy statement, she said, aims to empower the citizenry in attaining food self-sufficiency, especially in rice production, which is the staple diet of the country.

Mrs Jarju said the select committee on agriculture, rural development and NGO affairs, in execution of its oversight mandate, embarked on a nationwide tour to assess and gather first-hand information on agricultural activities and programmes.

The committee set out to scrutinise the state of affairs at mixed farming centres, horticulture and aqua-culture centres, and other agricultural projects in a bid to ensure and enhance efficiency, she said.

The committee also visited some Vision 2016 farms and the progress on those farms “is promising”.

“We want to recognise and commend the efforts of the European Union, funders of the MDG IC project, and all its implementing partners and also the OCP project funded by the Spanish and the Moroccan governments for the remarkable projects implemented that continued to improve the lives and livelihoods of many farmers, especially the women.”

The report was finally adopted by deputies. 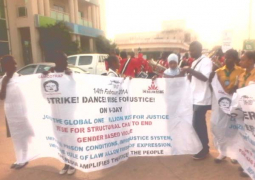