It is clearly wrong, according to Gambian law, to commit a person to detention at the remand wing of the prisons, without a court order.

Yet, it seems this is frequently happening, going by news media reports.

Indeed, this is always reportedly occurring in this country, despite there is so much talk of the rule of law by the government.

If the rule of law truly prevails, then one would expect that the constitution, which is the supreme law of the land, will be fully respected by all, especially all agencies of the government – be it the police, NIA, NDEA and others.

However, when you read news reports, on a daily basis, the impression one gets is that this is not necessarily the case.

In fact, one is made to believe that people and institutions in this country can flout the laws with impunity.

In any case, we want to remind all and sundry that the law is not only meant to be respected by the ordinary citizen and non citizens resident in this country.

Actually, the rich and powerful as well, by the so-called well-connected; but especially by those who work for the government, must be seen to be setting a good example.

In our view, the only way we can ensure that the peace and stability we enjoy in this country is maintained is by preventing the abuse of power, abuse of office, and to ensure justice for all. 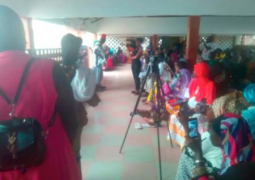