Real De Banjul moved five points clear at the top of the 2019-2020 Gambia Football Federation (GFF) division one league standings following their victory over Gamtel in the thirteen encounter, played at the Serrekunda East Mini Stadium over the weekend.

The city boys were three points clear in the league table with 25 points prior to their clash with the telecommunication giants.

They fought hard to snatch victory to increase their chances of winning the 2019-2020 division one league title after surrendering league crown to Brikama United last season.

They secure maximum points after the match to clinch 28 points in thirteen league outings and move five points clear ahead of second-place Gambia Armed Forces, who bagged 23 points. 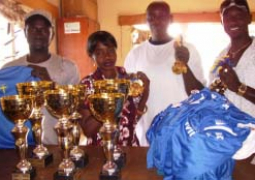