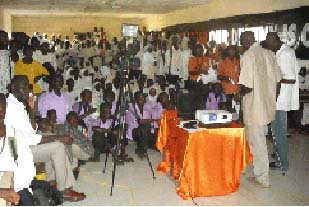 Qcell, one of the leading telecommunication giants and the newest entrants in The Gambia's telecom industry has continued to unveil productive services, the latest of which is the Qlesson service to students, at a well attended ceremony held at Sheikh Mass Kah Senior School.

The new service, Qlesson, according to Qcell officials, will avail the students the opportunity to make research through the use of mobile phone connection to the internet. The service has academic benefits that enable students to chat with friends and share academic ideas.

Speaking at the ceremony, the Customer Service Manager of Qcell, Mr. Lamin Yaffa told students that this was part of Qcell's back-to-school promotion campaign, aimed at introducing Qcell services to students.

Mr. Yaffa noted that they decided to embark on the initiative to help educate students on the latest services that would be of benefit to them.

According to him, the service will be important to the students as it will allow them to know the number of calls entered when their phone are off while in class. He disclosed as part of the programme, they would visit all the senior schools in the Greater Banjul Areas.

For his part, M. Tombong Saidy, Qcell's Media Consultant said the service is geared towards availing students and teachers the opportunity to know the unbeatable services offered by the company.

According to Saidy, the service contains academic benefits, such as Qweb, which he added, can be used by students to download important information for academic uses.

While noting that with the service students could make research on the internet, he said, it enables students to learn and know the world.

Mr. Saidy, however, stated that Qcell strongly discourages students to use mobile phone while in school or class.

For more information about this service log on to: www.qcell.gm.