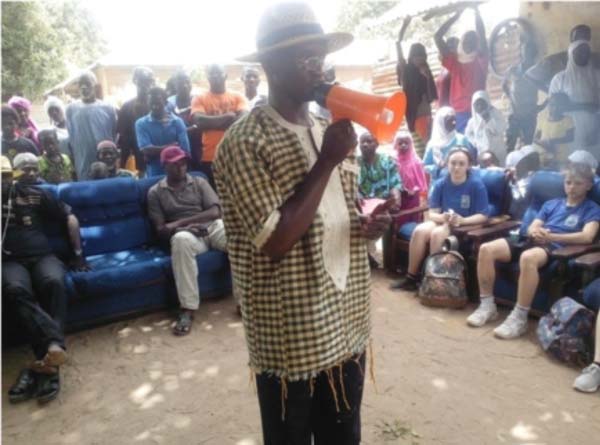 The National Assembly Member for Brikama North Constituency has said the advancement of grassroots learning involves rigorous efforts and should be advocated by all.

Hon. Alhagie S. Darboe made this remark during a visit by Kinver High School Students from Midlands the UK to Nyofeleh Madina in Brikama North Constituency of the West Coast Region.

‘’This is a great honour for me and my entire constituency because this is my first official engagement at the constituency after my election into office by the people of my area,’’ he said.

The visit by the philanthropists, who are currently constructing a classroom block for the village Arabic School, was “indeed a generous one”.

He said the philanthropists had shown to all they care about the Gambian people, especially those at the local communities.

The support would benefit not only the village but also the entire constituency as it was meant to promote education, which was indeed vital and timely.

He would never hesitate to work with such humanitarian philanthropists in the area at any given period since this is how elected representatives partner with developmental minded groups within and outside the country.

He called on the beneficiaries to continue nurturing the already existing relationship with their donors to attract more of such support as the village is in need of clean drinking water and other social amenities.

Craig Wilkes, head of the delegation and the link between the school and the village, described The Gambia as their home as supporting the needy people is like supporting themselves.

He said Kinver High School from the Midlands in the United Kingdom, (UK) is very concerned about the school’s development, adding that supporting those small kids to attain reliable, affordable and sustainable Arabic education was one of their targets.

Speakers on the occasion included Buba Badjie, VDC Secretary, Alkalo Fanding Bojang, Lamin Barrow, youth leader and Rohey Manjang, who all described the philanthropists as genuine partners very committed to the advancement of the village and the entire community.