The projector coordinator of PROGEBE-Gambia, Dr Famara Sanyang, has outlined the need for collective effort by members of the Gambia Indigenous Livestock Multipliers Association (GILMA) to support ITC breeding programme, while describing its linkage with GILMA as “very weak”.

He made this statement recently during a day-long validation workshop of the activities for the revitalization of GILMA, held at the Baobab Resort Hotel in Bijilo.

He said GILMA was formed many years ago but its linkages with the International Trypanotolerance Centre (ITC), breeding programme was “very weak”.

According to Dr Sanyang, the department of livestock knows the history of GILMA and it was a fact that the programme of ITC was not very much linked to that of GILMA, although that was the objective and if they are to support the breeding programme, then GILMA has to be revitalised.

He said the process of revitalizing started few years ago with a project from the ITC specialist to go to the field with GILMA members but it was found out that the consultant was not a specialist in institutional development but on technical matters.

Dr Sanyang said another suggestion was to have an external consultant on institutional matters with high professional standards, which was why they looked for such a body by the West Africa Rural Foundation (WARF) to conduct a participatory Institutional Diagnoisis of the association.

He said there was need to have a professional consultant that would help in the revitalization of GILMA, adding that he has no doubt that the department of livestock, when it is fully operational, with the required staff, would be able to take care of the revitalization process.

He went on to say that seeing GILMA functional is key, which requires commitment beyond their self interest.

Dr Sanyang further revealed that it was from the ITC that he joined PROGEBE-Gambia in 2008 and in accordance with the provision of PROGEBE, there was need to support both ITC and GILMA operations.

He said that after conducting an assessment to know their needs, PROGEBE–Gambia developed eight hectare pasture land, which has contributed a lot in alleviating the nutrients status for the requirement of ITC.

He said all this intervention was geared towards improving the operation of ITC to become a breeding programme of excellence to the Gambian farmers, improve their productivity of livestock and indigenous animals. 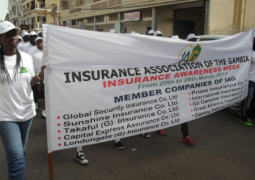