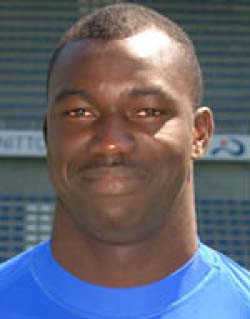 Seyfo Soley is a rocky central midfielder with the Gambia national senior team otherwise known as the Scorpions.

The 31-year-old former Hawks talented footballer was born on 16 February 1980 in Lamin, The Gambia.

Soley, who first played as a professional footballer following his switch from Banjul Hawks to F.C. Nieuwkerken Sint-Niklaas, steered for a host of European clubs including England and Belgium.

He became the second Gambian foreign-based player to play in the UEFA Champions League after former Scorpions captain Jatto Ceesay.

He played for Banjul Hawks FC, K.S.C. Lokeren Oost-Vlaanderen, Al-Hilal and K.R.C. Genk, prior to signing for Preston in January 2007 but he parted company with Preston following a short spell after he rejected the club’s offer of a new deal.

Soley, who previously played for Doxa Katokopias, made his debut for Preston North End in the 2007 fifth round of the FA Cup, which Preston lost 3-1 to Manchester City.

He was also given a trial with Norwich City in the 2008-09 season under Glenn Roeder but was not offered a permanent deal.

The 31-year-old midfielder made another move on his international journey by joining the Cyprus premier tier side Apollon Limassol.

The new deal, which Soley hailed as a good offer worth grapping, took effect from January 2011 after Apollon Limassol exhausted their 17-foreign-player limit.

He was widely criticised for his playing attitude in the later part of his national team career notably during the Scorpions 2-nil defeat to Guinea Conakry in 2007 in a game he was entirely blamed for Gambia’s loss and eventually became surplus to requirement before earning himself a recall to the team recently.